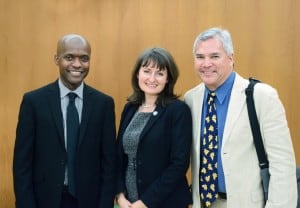 The Culver City Democratic Club last week overwhelmingly endorsed candidates Meghan Sahli-Wells, Thomas Small and Daniel Lee for the three open seats on the Culver City Council. The endorsement, voted by Club members, immediately followed a forum during which all Democratic candidates responded to questions about their experience and perspectives.

“These Democratic candidates are a unifying force for our city. This is the reason we should find them so compelling to vote for April 12th, “ Khin Khin Gyi, president of the Culver City Democratic Club, said.

“Culver City Democrats look to us to provide the information they need to vote for the best candidates,” Darryl Cherness, a past president of the Club, said. “We take this responsibility very seriously. We are very pleased to endorse Meghan Sahli-Wells, Thomas Small and Daniel Lee for City Council this April.”

Council member Meghan Sahli-Wells , who was raised in Culver City and graduated from UCLA, is the only incumbent in the race. She was elected in 2012 and has been endorsed by all four of her fellow councilpersons.

Meghan Sahli-Wells and her husband, Karim Sahli, a small business owner, are the parents of two sons who attend Culver City Middle School.

The list of her priorities is long. Among them are collaborating with the school district (CCUSD), addressing mansionization and airplane noise, investing in critical new infrastructure, attracting new businesses, maintaining high quality City services, and protecting health and safety with stringent oil drilling regulations. She advocates creating a comprehensive community plan for the City, further streamlining city services, supporting Fire Department and Police Department efforts to prepare for natural and man-made disasters, designing streets safe for all users, and providing high-speed Internet connectivity to Culver City businesses, schools and residents by installing a municipal fiber network.

Thomas Small, a graduate of Yale University, is a commissioner on the Culver City Cultural Affairs Commission. He and his wife, Joanna Brody, are the parents of twins who attend Linwood E. Howe Elementary School. She is PTA president. Mr. Small, who is fluent in Spanish, volunteers in the school’s Spanish enrichment program, which his wife co-founded. He also coaches AYSO soccer.

As a commissioner, Thomas Small initiated and moderated “Architecture Talks,” a series of public conversations among the City’s residents, business persons, and world-renowned Culver City architects. He initiated the artist and poet laureate program in advance of the City’s centennial. He brought the City’s first international film festival to Culver City and awarded $48,000 in grants to Culver City performing arts organizations.

Thomas Small is an expert in the fields of architecture and urban planning. He points to the nine new developments already underway locally and emphasizes the importance of the City requiring green open space, innovative transportation alternatives, sustainable design and environmental building practices, walkability and bikeability. The transportation alternatives will mitigate traffic congestion, and the sustainable design will result improved parking. All these features will make these developments work for Culver City residents, Mr. Small says.

Thomas Small is committed to nurturing and encouraging creative businesses and the innovation, media, design, digital and internet economies that have much potential to bring additional revenue to Culver City.

Daniel Lee is a 13-year resident with a master’s degree in social welfare from UCLA. He credits his grandmother, who participated with Dr. Martin Luther King in the Montgomery bus boycott, for his desire to be of service and his own social justice perspective. He has served on the Culver City Martin Luther King Celebration Committee for the past five years, planning its citywide celebration of the iconic Civil Rights leader.

Much of Mr. Lee’s local effort has been with youth. A filmmaker and actor, he has volunteered with El Rincon Elementary School students in an artists and communication program for several years. He also developed a Civil Rights curriculum that he implemented at the Teen Center to increase young people’s understanding of their country’s history.

Daniel Lee has placed the environment and the health of residents at the center of his agenda. Chief among his concerns is the Inglewood Oil Field. As an environmental fellow with Liberty Hill Foundation, he worked with area organizations toward a Los Angeles City fracking ban. He and other Culver City residents also met with State Assemblyperson Sebastian Ridley-Thomas to advocate for a state environmental bill, SB 350.

As the only renter among the candidates, Mr. Lee intends to focus on affordability, homelessness, enacting a city minimum wage and making the City work for all residents.

Daniel Lee has been a key grassroots organizer in Los Angeles’ “Money out, Voters In” initiative, and Move to Amend Los Angeles. He was asked to join Move to Amend’s national board and since then has travelled across the country, educating audiences about their Constitutional rights.

“We need people on the council who can support Meghan Sahli-Wells and her important work in sustainability, transportation and social justice,” Democratic Club member Rick Tuttle said. “We believe that Thomas Small and Daniel Lee can help increase the quality of life for all of us in Culver City.”

The Culver City Democratic Club has been active in local, state and national politics since 1953.

The Culver City Democratic Club has been a vital force in electing candidates to local office, as well as to state and national positions. Many members of Culver City’s City Council have been members of the Club, including four of the five current Councilmembers.