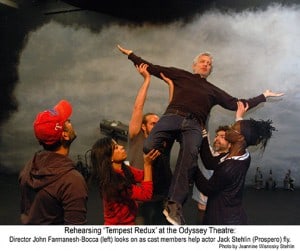 ​​​​Derived from Shakespeare’s fantasy, this freshly conceived reconstruction of The Tempest is a potent confection of physical theater and verbal gymnastics — a father-daughter story for the ages that explores the power of love and forgiveness.

According to Farmanesh-Bocca, “‘redux’ signifies that we’re re-examining the text from the ground up and visceralizing it with a ton of athletic movement. It’s a meditation on Shakespeare’s work, contemporized for a modern audience, but without losing any of the language or traditions of the original. As radical as the adaptation is, I’m actually a purist.”

To that end, the cast has been stripped to seven actors and three dancers who not only play multiple roles, but also share some of the same parts. In addition to Stehlin, Tempest Redux features Mimi Davila (Ophelia in Tarell Alvin McCraney’s adaptation of Hamlet at Miami’s GableStage) as Miranda and Hunter Paul (Macbeth, The Importance of Bing Earnest and The Tempest for Oklahoma’s Shakespeare in the Park) as Ferdinand. A two-headed Caliban is played by both Willem Long (Rogue Artists Ensemble’s Wood Boy Dog Fish), who also takes on the role of Sebastian, and Dash Pepin (Pericles Redux, Titus Redux and Ajax in Iraq for Not Man Apart–Physical Theatre Ensemble), who also plays Francisco. Dennis Gersten (co-artistic director of NoHo’s Theatre Unlimited) doubles as Antonio and Trinculo, while Gildart Jackson (Class at the Falcon Theatre) does triple duty as Alonso, Gonzolo and Stephano. The role of Ariel is shared by three dancers: Mecca Vazie Andrews (dancer, choreographer, artistic director of The Movement), Lilian Manansala (DOMA’s American Idiot) and Emily Yetter (Regan in The Exorcist at the Geffen Playhouse).

“The actors have been doubled in such a way as to illuminate the duality of each character, the yin and yang of the full person,” explains Stehlin. “The concept is that this is Prospero’s dream, and we turn The Tempest upside down in a way that makes it really come alive.”