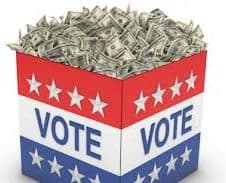 The Los Angeles League of Women Voters has a topic that is probably much on your mind lately – money and politics. Joe Guardarrama knows about campaign finance from two perspectives. As an attorney specializing in political law, he advises candidates, officeholders, political action committees, independent expenditure committees, and major donors on all legal aspects of their involvement in the political process, including compliance with campaign finance laws. Joe has also been a candidate for public office who had to raise money to finance his own campaign and file the disclosures required by state and local laws.

Joe will talk about how money is raised, spent, and reported in political campaigns, how this influences who gets elected, and what happens after election. Why do campaigns cost so much? Frequently the candidate who raises the most money is the one who is elected, but which is cause and which is effect? Do contribution limits help maintain a candidate’s independence or make fund-raising more onerous? What motivates people to make political contributions? Come hear Joe’s perspective on these questions and more.

Space is limited and reservations are required. Please RSVP to [email protected]