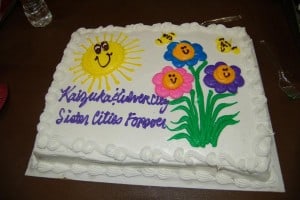 Enjoy international entertainment and appetizers with local officials and the Consul General of Japan in celebration of the 50th anniversary of the sister city relationship between Kaizuka and Culver City, on President’s Day, Feb. 15, 5:00-7:00 pm, in the Dan Patacchia Room at Culver City City Hall.
The Culver City Sister City Committee and dignitaries will welcome Consul General and Mrs. Horinouchi and other Japanese guests, including runners Kiyoshi Takihara (27) and Masako Yasuba (40) from Kaizuka, who will have raced in the L.A. Marathon on Valentine’s Day.
“Everyone is invited to join in the fun, as the bond with our Japanese sister city is strong with great cultural and educational friendships the past five decades,” said Culver City Sister City Committee President Sonia Karroum.
The Culver City Middle School Taiko drum group is slated perform, according to event chairpersons Lyndon Stambler and Allison Burns.
Former Culver City Mayor and Culver City Crossroads’s own LOCALmotion columnist Jozelle Smith, who proclaimed May 1, 1993, as Kaizuka City Day in recognition of the Japanese city’s 50th birthday, will present gifts to the two marathon runners.
The two Japanese runners will party at the Welcome Potluck, presented by the Culver City Sister City Committee, Feb. 12, 6 p.m., at Mike Cohen’s house, 4378 Jasmine Ave. to kickoff activities until their Feb. 17 return to Kaizuka.
The Committee also has sister city relationships in Canada, South Korea and Mexico. For info: www.culvercitysistercitycommittee.org.