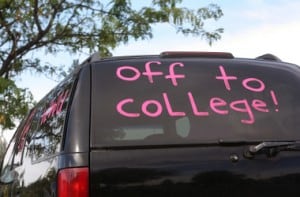 I am in the enviable position of having two sons in college right now. One is completing the last semester of his fourth year, and the other is starting the second semester of his first year. My nest is empty, but my heart is filled with pride for their accomplishments.

Throughout their K-12 years, we actually envisioned life looking something like this, and seeing a vision come to fruition, is sweet.
My older son has been at San Francisco State University, and I cannot sing my praises for his experience there loudly enough. “State,” as it is referred to up in the Bay Area, was the first of several colleges to accept him, and a quick weekend visit made it difficult not to fall in love with the prospect of living in the San Francisco Bay Area for a few years. SF State was also one of the few campuses that was known for having the particular major he was interested in pursuing. Being major-decisive is key to finding the right fit of a university. You can do that when you’ve been a “doer” during your formative years, with the understanding that anything can change after you’ve started college. It is just a richer experience when starting with some direction.
My son has partaken of myriad experiences that could only be had at a 4-year university: from on campus living and on campus jobs to becoming involved as a leader in various on and off campus groups, to knowing the satisfaction of completing his degree on time, not to mention having arranged a final semester internship that he describes as “a good fit.” He did not do a study-abroad program per se, but still found time to take several international and domestic trips: some conferences, some internships, some vacations, during his four years.
As for my younger son, he tells it this way: his friend’s mom was giving him a lift to his Youth in Government meeting at the Culver Palms YMCA when he was in 10th grade. She asked him where he wanted to go to college, and he responded, “Maybe UC Berkeley.” We’d visited there in the past, and he figured it was as good an answer as any. She said, “Oh, Berkeley is a hard school to get into…” and he claims to have used her words as a mantra to prove that he could. And he did. Berkeley, conversely, was the last school to get around to accepting my son, but the acceptance letter offered him a unique opportunity. Berkeley was piloting a program called, “Global Edge,” an extension of the UC’s age-old and well known Education Abroad Program (I went to Japan on it in 1978). It was an offer to spend the first semester abroad in London! Of the students accepted from Culver High to Berkeley this year, others were also offered this chance, but my son was the only one who decided to do it. He is now part of a cohort of 57 kids among thousands of Berkeley freshman. We are big believers in decisively grabbing opportunities when they present themselves.
Having both boys back now in the Bay Area has been nice for me; I get to visit both guys for the price of a couple of tanks of gas. But this epistle is not really about my boys, nor is it a rhapsody of NorCal’s charms. Rather, it is about decisions.
During most of a person’s K-12 life, through the maze of rules and ever-present homework hanging over one’s head, many of life’s decisions are made for you. Whether by parents, teachers or others in your life, you sail through years of classes and grading periods and summers more on an expense-paid business trip than a well-earned vacation. Through it all, deciding on the college route should be made early, and supported by parents and guardians, many of whom – even in this day and age – have not been to college themselves, so may not really comprehend the value.
If you buy in to the idea that a 4-year college education is valuable, accessible, affordable, and not only for the top 10% or 20% of a high school graduating class, I have a secret. The way to qualify is to learn to go along with the K-12 shtick. “Going along” means earning C’s or higher in all subjects, from middle school onward. It’s not only about what you learn and how you learn it, it is more about playing the game of classwork, homework and periodic assessments of “mastery.” It is about fighting urges of perfectionism, sometimes being satisfied with “good enough,” and being willing to improve when help is offered.
Students who earn 3.0 GPA’s and above will be admitted to California state colleges for sure, and may have other choices as well. Students who earn 2.0 GPA’s and above still have a chance to have the 4-year college experience, which cannot be replicated by going to a junior college the first two years.

Of course, there is nothing wrong with going to a JC, especially for students who have not done as well in the K-12 scenario, and only managed to earn low C averages, or below. Such students, ALL of whom I believe CAN be successful later in academic or non-academic pursuits, just may need a little more incubating time. I do believe, however, that students in our city, state and country with 2.5 and above should get on with defending our country by attending university right out of high school. Too many qualified kids opt out of this decision with an “I’ll just go to community college and transfer…” The number of students who actually transfer successfully after two years is low.
Kids sometimes make bad decisions, and have parents who take a back seat to their choices. On the other end of the spectrum, there are helicopter parents and their sometimes compliant children. My concern is more the great middle, too many of whom seem content to accept less, when they could have had more.