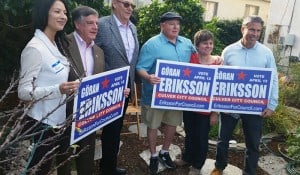 The support for longtime Culver City resident and small business owner Göran Eriksson continues to pour in, pictured in center with (from the left) School Board member Anne Allaire, City Council Member Jim Clarke, Vice Mayor Andy Weissman, School Board Member Kathy Paspalis and City Council Member Jeff Cooper.
To date, Eriksson has received the endorsement of four of the five sitting City Council members – Mayor Micheál O’Leary, Vice Mayor Andy Weissman and Councilmembers Jeff Cooper and Jim Clarke – in his bid for a seat on the Council on the April 12 ballot. He has also received the endorsement of numerous former members of the Council, including Scott Malsin and Ed Wolkowitz.
“All of these people know exactly what it takes to effectively lead this city, and I am honored by the confidence they have shown in me,” Eriksson said.
“He will be a great addition to the City Council,” said Councilman Clarke, who said that he was impressed with Eriksson’s work as the chair of the city’s Finance Advisory Committee.
“Göran’s depth of knowledge on every issue he attacks is very, very apparent,” said Councilman Cooper, adding, “We are like-minded in keeping our city fiscally responsible.”
In addition to the scores of Culver City residents who have endorsed Eriksson, his list of supporters also includes a long line of current and former CCUSD Board of Education members, underscoring his commitment to work closely with our local schools; and water advocate Scott Houston, a member of the West Basin Municipal Water District board.
“In a position of leadership, you have to look at the vision and the future of the city, and I believe Göran brings good ideas and solid planning to the table,” said Houston.
A video sampling of comments from supporters is now available on Eriksson’s website: www.erikssonforcouncil.com/news
His supporters will hold also their major fundraiser at 6 p.m. on Saturday, January 30 at the Courtyard by Marriott Hotel, 6333 Bristol Parkway in Culver City.
The event will include dinner, auctions, music and more.
Tickets are $60 per person and can be reserved by emailing [email protected], or visiting www.ErikssonforCouncil.com/fundraiser.
“As I walk throughout to the city and meet more and more Culver City residents, I am pleased with the support I have received,” Eriksson said. “I think people understand my platform, which centers on being prudent with our finances, maintaining our quality of life and putting neighborhoods first.”
As chairman of the city’s Finance Advisory Committee, he has led the committee in making recommendations to increase community involvement in the city budget process, update the city’s current financial policies and extend the city’s long-term financial forecast. In addition, under his leadership, the committee has developed a Measure Y quarterly fact sheet and communication plan, made recommendations regarding the city’s financial transparency strategy and made recommendations regarding the communication of financial information on the city website.
Eriksson also serves as the vice chair of the Culver City Unified School District’s Citizen Bond Oversight Committee, where he helps keep the public informed of the expenditures of the bond proceeds and ensure that bond proceeds are used only for the purposes set forth in the Measure CC bond.
“I believe I have the background and experience necessary to keep our city on firm financial footing while making the tough decisions that will guide us into the future,” said Eriksson, who also served as a member of the Culver City Advisory Committee on Redevelopment. “I believe in protecting our quality of life, enhancing city services and sustainability and moving our city into the future while maintaining its small-town charm. But at the heart of all of that is the need to make prudent financial decisions so that Culver City can continue to provide the services we all have come to expect.”
There is no doubt why the city has been keen to capitalize on his business savvy – Eriksson has been in international sales, marketing and business development for more than 30 years.
Eriksson is president and founder of esi Techtrans, Inc., an international business development consultancy he founded in 1987. He also serves as chairman of the board and CFO for Euro VAT Refund Inc., the company he co-founded with his wife, Britta, in 1992. That firm is a leading VAT financial service corporation that specializes in VAT reclaim and management.
Eriksson served as chairman of the Culver City Chamber of Commerce in 2012. He is a member of Culver City Community Emergency Response Team (CERT), Culver City Amateur Radio Emergency Service (CCARES), Culver City Exchange Club, a graduate of the Culver City Citizen’s Police Academy and has coached soccer in AYSO for several years.
Eriksson is also Chairman of the Board of Trustees of Lund University Foundation, Inc., where he raises funds for a project to curate, translate, and digitize the Ravensbruck Archive, a rare body of survivors’ real time testimony, which now resides at the Lund University Central Library. Ravensbruck was a concentration camp built solely for women and children, the only one of its kind. The Archive includes 500 interviews done at Lund of the women of Ravensbruck, among 21,000 evacuated to Southern Sweden.
A more then 20-year homeowner in Culver City, Eriksson together with his wife of 30 years, Britta, has two sons, Niklas and Philip, who have grown up in Culver City. They are now studying at Loyola University Medical School and UC Davis, respectively.
“I love Culver City and I am excited about my campaign, which will be about moving our city forward and working together to address our challenges and take advantage of the opportunities we have before us,” Eriksson said.