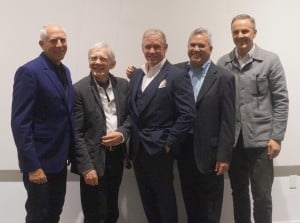 Small offered the Winston Churchill quote, “We shape our buildings; 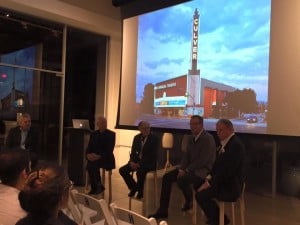 thereafter they shape us” as the starting point of the discussion, and each architect had several tales to tell supporting the idea. Holding the Kirk Douglas Theater as an example, Erlich noted how the capacity of the space spoke to the intimacy of the experience. “The audience flows towards the stage in a way that lets them feel like a part of the performance.”

Offering the fine points of difference from theater, orchestral and amplified music, dance and spoken word, there was agreement that spaces had to be workable for all, but each had needs unique to their own art. The acoustics for amplified music and choral performance could vary by seconds, and that would create a different sound in the space.

Hodgetts, the architect taking on the upgrade of the Robert Frost Theater at CCHS, spoke with feeling about how revolutionary that structure already is. “Certainly when it was first built, it was without a doubt the most noted avant-garde building in the state. It really is a very daring building, and we are just looking at how to keep that beautiful shape and work with it, enhancing the acoustics and supporting the many possibilities of use of the stage.”

In the context of creating performance space, all agreed that there was an element of risk – even with mathematical formulas, engineers and scale models. Rachlin noted, “You have to build the space before you can truly know how the acoustics are going to sound. All the calculations you make are really just theory. Get to practice, and then you have your answer.”

Noting that Culver City was very lucky to have it’s downtown area “bookended” by  the Ivy Substation/Actors Gang Theater and the Center Theater Group’s Kirk Douglas, the panel agreed that a well designed performing arts space was a part of creating a city as a destination.