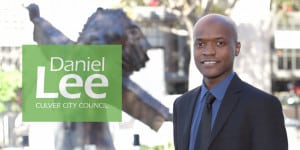 Activist and community organizer, Daniel Lee announced his plans to run to represent the residents of Culver City as a member of the City Council.

“After careers in the nonprofit and community organizing sector, a stint in the Air Force and California Air National Guard, and time in the entertainment industry I am heeding the call to go into public service and run for elected office,” says the first-time candidate.

Lee’s campaign is built on a three-issue platform: environment, fairness and accountability.

Environment: As a city that sits on the edge of the Inglewood oil field, we have a profound impact on how rules crafted to protect us from contamination due to fracking and other environmental concerns will affect the state and the country.
Fairness: We must take proactive steps to insure that our city develops in a way that reflects the demographic and economic levels of our diverse population. Our minimum wage should keep up with that of other surrounding Greater Los Angeles communities. We should work to attract top talent to our businesses, our homeowners and tenants must be protected so that they are not forced to leave our communities.
Accountability: Local government’s chief responsibility is to be accountable to the people who have elected them. In order to do this more effectively we must begin to think beyond City Hall and go into the various communities of the city on a regular basis to develop a true understanding of the issues affecting our city’s residents on a day to day basis.
Lee launches his campaign with the endorsements of Culver City School Board member Kelly Kent and former Los Angeles City Controller and Culver City resident Rick Tuttle.

Lee explains his decision to run: “I believe a city should reflect the views and values of its citizenry and the governing institutions of the city should strive to reflect the complexion of the composition of the city. It’s time, Culver City. It’s time to make changes that will make a difference.” If elected Lee would be the first African-American City Council person in Culver City’s nearly 100 year history.

The campaign is holding a Campaign Kickoff Event at the home of newly elected Culver City School Board member Kelly Kent on Sunday January 17th at 1pm.

For more information on the campaign and our kickoff event please visit our website at danielwaynelee.com.