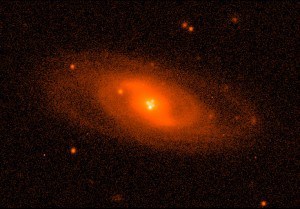 A team of Spanish astrophysicists has obtained precise measurements for the innermost region of a disc of matter in orbital motion around a supermassive black hole in the lensed quasar known as Einstein’s Cross (Q2237-0305). It constitutes the most precise set of measurements achieved to date for such a small and distant object.

The researchers used microlensing to resolve the distorted images collected by the OGLE and GLITP gravitational microlensing projects, which have had their instruments trained on Einstein’s Cross for over a decade. By studying the variation in brightness of four different images (the four points of the ‘cross’), they have been able to obtain precise measurements of what is likely the innermost stable orbit of its accretion disc.

“Over recent years we have shown how microlensing allows us to analyze the structure of accretion discs in quasars, and now we have obtained precise measurements for a structure right at the innermost rim, potentially its last stable orbit before the black hole event horizon,” explains José Antonio Muñoz, lecturer at the Department of Astronomy and Astrophysics at the Universitat de València, who took part in this research alongside colleagues at the universities of Granada, Cadiz and the Canary Islands Astrophysics Institute.

His colleague, Jorge Jiménez Vicente at the University of Granada, adds that “the big breakthrough here is that we have been able to do this for such a small disc, so far away—it is like being able to detect a one euro coin located over 100,000 kilometers away.”

Currently only one in every 500 quasars can be measured in this way. However, Jiménez Vicente points to a future, when large-scale monitoring programs (like the 8.4 meter Large Synoptic Survey Telescope planned for northern Chile by 2022) are up-and-running, where “the detection of high magnification microlensing events like this one will be possible for thousands of quasars.”

Shining so brightly that they eclipse the ancient galaxies that contain them, quasars are distant objects powered by black holes a billion times as massive as our sun. These powerful dynamos, the brightest and most distant objects that can be observed, have fascinated astronomers since their discovery half a century ago.

A gravitational lens refers to a distribution of matter (such as a cluster of galaxies) between a distant source and an observer that is capable of bending the light from the source, as it travels towards the observer. This effect is known as gravitational lensing and the amount of bending is one of the predictions of Albert Einstein’s general theory of relativity. 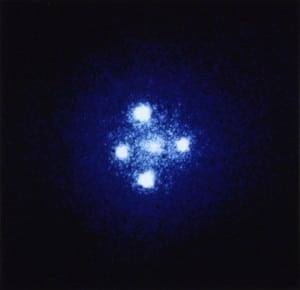 a gravitationally lensed quasar that sits directly behind ZW 2237+030, Huchra’s Lens. Four images of the same distant quasar appear around a foreground galaxy due to strong gravitational lensing, which bends and splits the starlight, causing the single quasar to appear as four images.

Einstein’s Cross is located in the constellation Pegasus.