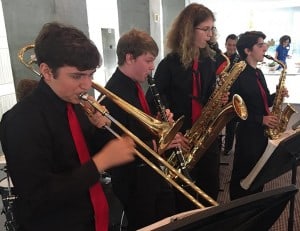 The Culver City High School AVPA Music program will present its annual Winter Concert on Friday, Dec. 11, at 7 p.m. in the Robert Frost Auditorium. Among the holiday highlights will be Alfred Reed’s iconic work for winds, Russian Christmas Music, performed by the Concert Band, as well as a very special live performance of Bruce Bruce the Hanukkah Moose. The original Hanukkah song was composed by AVPA parent Howard Behnken and Jayce Murphy, based on a children’s book by Howard and Elaine Behnken. Their son Reno is a senior in the AVPA music program and will be performing the song with his dad, Howard, along with AVPA musicians.

The Jazz Ensemble will pay tribute to Frank Sinatra, whose 100th birthday is the day after the concert, while the Chamber Singers have planned a jazz spin on Carol of the Bells and a modern Deck the Halls. Also performing will be the String Ensemble, Jazz Combo, and Sax Ensemble.