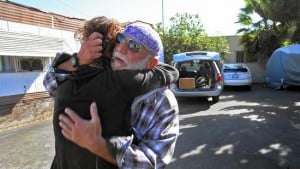 The Grand View Development company has spent more than a year trying to clear out the residents of a mobile home park in Culver City to make way for upscale apartments.

The 62-year-old Israeli Army veteran has been living in the trailer park for more than 20 years. He raised his son, now a UCLA grad, in a homey double-wide that he’s upgraded with luxuries over the years.

The developers who bought the Palms Mobile Lodge paid most of his neighbors to move. But Zuker was insulted by what they offered and has refused to go.

His trailer — on a quiet block lined with apartment buildings, just a bike ride away from the beach — is worth much more to him than the $19,000 offer on the table now.

“I’ve got a three-bedroom house, with a Jacuzzi and a laundry room, in the best location in the world,” he said. “All we’re asking is a fair value price for our property.”

I’ve got a three-bedroom house, with a Jacuzzi and a laundry room, in the best location in the world. All we’re asking is a fair value price for our property.
– Ischar Zuker, 62
But how do you value a mobile home? Like a car that’s depreciated over the years, or a dwelling loaded with memories that time makes more valuable?

“This is not like little meth labs or anything. This is people’s homes,” said Zuker, who’s been ordered to move by Tuesday so demolition can begin. “This is about how rich people treat poor people, like we’re barefoot trailer trash.”

Almost all of the 20 residents of the trailer park have taken the buyouts Grand View Development offered and moved out.

Most of their mobile homes were built in the 1960s, which makes them too old to relocate to another trailer park. Appraisals commissioned by the developer valued them at less than $25,000 each.

Grand View partner Jeffrey E. Smith said they offered up to four times the appraised value to residents who agreed early on to move out. “I understand it’s a sad thing, losing your home…. We tried to be overly fair in an effort to keep peace with the residents. And most people took the deal.

“The ones that are still there, they just don’t want to leave. They’re just not accepting that the park is closing.”

For some, the payouts were a blessing. One woman took her $80,000 and bought a home in Palmdale, near her grandchildren. An elderly man was able to find a nice apartment nearby that his family could afford.

But I can see why leaving is hard — and why sympathy doesn’t go very far.

He bought the trailer for $30,000, and spent many times that on improvements, he said. “Twenty years ago, nobody thought they’d sell the park. So we sunk money into it.”

Across the driveway is his friend Israel Shachar, who has lived in the park for 17 years. Shachar, a retired electrician, remodeled his trailer — with skylights, wood floors, granite counters — so he could rent it out when he traveled.

Now hobbled by health problems, Shachar, 64, is afraid he’ll wind up living in his van. His trailer was his retirement plan. But he was beginning to pack up when I visited the park this week. He’s running out of energy to keep battling the developers, who’ve offered him $24,050.

His friend Rachel Davis, a retired psychologist, has been trying to help the two men, pushing for new appraisals that take into account the value of living in an area as rich with amenities as their neighborhood in Culver City.

“These guys are saying: ‘Over my dead body.’ But the reality is the developers bought the place. What they should do now is pay them a proper amount for their homes,” she said. “And why not let them stay until after the holidays?”

There’s still hope for a settlement that might suit Zuker, the developer told me Friday.

“We’ve gone back into discussions with him,” Smith said. “We don’t want this fighting with the residents…. They were scared from the start, and we went into this sympathetic to that. But if they keep turning us down over and over, what can we do about that?”

See the most-read stories this hour >>
Their homes might not be worth much in the hard calculation of property value. But those trailers represent their stake in a real estate market that has all but closed its doors to seniors getting by on small fixed incomes.

Their trailer park will be replaced by an apartment complex of 36 two- and three-bedroom units. Three of those would be earmarked for low-income renters; the rest would probably go for at least $3,000 a month.

That’s typical of the housing shift in neighborhoods across Los Angeles County — a shift blamed for a rise in the number of people living in cars, vans and homeless encampments. As affordable housing disappears, people are forced into a market they can’t afford.

“I understand it,” Davis said as she helped Shachar sort through his belongings and prepare to pack.

“Culver City is going through gentrification. They want this big piece of land. They see this as a way to beautify the area…. But these are people who can’t afford to leave, who have nowhere to go,” Davis said.

“It may have all been legally done, but it’s still a heartbreak.”

Editor’s Note – Long time Los Angeles Times columnist Sandy Banks will be ending her work at the newspaper soon. This is a great moment to drop her a note and let her know if her work has made you smile, or think. or connect. Our hat is off to a wonderful writer, who will be very much missed in the LA Times.