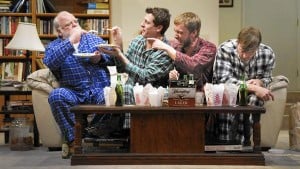 The question is ‘what do you think you should do?’

The production of “Straight White Men” now playing at the Kirk Douglas Theater is the latest from playwright Young Jean Lee, and ironically, her most traditional and conservative piece. Three scenes, four actors, in a contemporary living room setting, dialogue about daily life. When the traditional authorities are questioning themselves and each other, what do they think they should do?

A widowed father and his three adult sons celebrating their traditional suburban Christmas with Chinese take-out and a plastic tree start to question their contentment when the oldest son unaccountably begins to cry. This opens up a whole box of questions about status and meaning, life choices and feelings.

The actors do a great full gamut of how men play with each other,  and everything from the father sneaking presents into Christmas stockings to the guys having a spontaneous dance party reflects some level of emotion; paternal affection, brotherly competition, physical joy. But the mystery of what the oldest brother is weeping about expands throughout the play.

The problem that Lee presents to the characters – what should conscious, straight, white guys do with their privileged positions in the society – gets seen from several perspectives, and discussed in detail. But you have to walk this one out the door of the theater and into the world. It’s an interesting starting point, but there are no easy answers here.