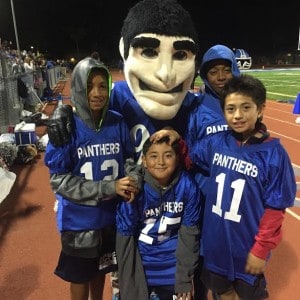 In front of a standing room only crowd, the Culver City 6th Grade Flag Football Panthers put an emphatic end to their perfect season with a 26-6 thrashing over previously unbeaten The City Tigers for the FIYA championship on Friday. Culver City ends the season with a perfect 6-0 record.

Culver City was led, yet again, by quarterback/safety William Schultz. Schultz, the unquestionable, but unofficial, Most Valuable Player of the FIYA league, led the Panthers with 172 total yards and a touchdown. Offensive juggernauts tailbacks Royce Williams and Emmanuel Shaw both eclipsed the 1,000 yard season rushing mark with huge games against The City, with scores for each, as well. The City couldn’t keep up with the power and speed of Willams and Shaw, and watched as the Panthers made great gains virtually every time either touched the ball.

Schultz, Williams and Shaw were aided by FIYA’s best offensive line. Williams commented, “Running behind John (Kim), Miro (Garrett), Alba (Navas) and Thomas (Chee) is fun. They open up such huge holes that my job was easy.”

Defensively, the Panthers held the Tigers to 63 yards of total offensive. Mia 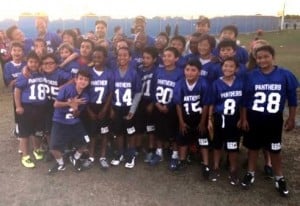 McKinley, Emmanuel Shaw, Getu Whitney, and David Lee pressured the Tigers quarterback on every possession, wreaking havoc along the way. Defensive backs Elijah Adams, Leo Matsuoka, Brandon Zeidman, Royce Williams and William Schultz thwarted the Tigers aerial game, causing The City to have to resort to short passes for little or no gain. Linebackers Thomas Chee and Nate Nakamoto protected the middle and kept the Tigers off balance throughout the contest.

Culver City, which never trailed and was never in any real danger of losing, led 26-0 after halftime and cruised to the championship. Coach Maurice Shaw, perfect in his first season coaching for Culver City, was predictably cool and complimentary. Addressing his team, Shaw explained, “You guys (and girls) worked extremely hard all season. You’ve put in a tremendous amount of effort and this was clear by the results. You should all be very proud. Keep working hard and you will all be successful.” Coach Shaw, a standout tailback at the University of Washington, was already seen planning out Spring Practices, months away.

After defeating the Tigers, many of the Culver City players went to the Culver City High School Varsity Football game wherein the Centaurs clinched the Ocean League title against rival Beverly Hills 41-12. The Centaurs open the CIF playoffs Friday against visiting Pacifica (Oxnard) at 7:00 pm at Jerry Chabola Field. Tickets are available at the gate.

In just a few short years, Coach Shaw’s squad could very well find themselves playing at the very same Jerry Chabola Field as Centaurs. For now, however, the Panthers are content to celebrate a perfect 6th grade season.