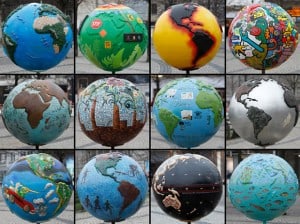 In response to increasing concerns about the future of the planet due to global warming, Los Angeles artists and arts organizations are uniting for VisionLA ’15 Climate Action Arts Festival, a citywide climate-focused arts festival celebrating the power of art to make change. Happening throughout the greater Los Angeles area from Monday, November 30 to Friday, December 11, 2015, VisionLA ‘15 aims to stimulate a creative response to the climate crisis through arts engagement. The Los Angeles-based multidisciplinary festival has been timed to coincide with the United Nations 21st Conference of the Parties on Climate Change (COP21) in Paris and is inspired by the concurrent ArtCOP21, a Paris-wide arts festival expressing support for a strong international climate treaty and positive, sustainable change.

VisionLA ’15, the first festival of its kind in the Los Angeles area, is co-executive produced by Cheryl Slean and Guy Zimmerman in association with So Cal Climate Action 350, the Los Angeles branch of environmentalist Bill McKibben’s 350.org climate activist organization, and Arts Earth Partnership. Events will be held in venues, city streets, public parks, river sites, galleries, and storefronts. The Festival and key partner, So Cal Climate Action 350, will prepare educational and outreach materials to be presented at participating events to grow public awareness and enthusiasm for a strong and timely response to global warming. For additional information on the Festival, please visit  visionlafest.org.

Among the special events/programs being presented by the Festival are:
• VisionLA Fest Visual Art Exhibit in DTLA, featuring over 200 environmentally-themed and recycled materials artworks (painting, photography, mixed media, and sculpture), by local artists. [Art]
• Concert for the Climate, a classical and new music event at the First Congregational Church of Los Angeles featuring Vicki Ray, the Street Symphony featuring members of the LA Philharmonic, performers from the LA Opera, and Don Preston (of the Mothers of Invention) performing on organ. [Music]
• The VisionLA ‘15 Film Series at the Helms Design Center in Culver City, the Armory Center for the Arts in Pasadena, and other venues, will screen 20 environmentally-themed documentary shorts and features, including 100 Mules Walking the LA Aqueduct, an exclusive simulcast with the Discovery Channel’s broadcast premiere of Racing Extinction, Merchants of Doubt, Soil Carbon Cowboys, Standing on Sacred Ground, student-made Green Shorts from Pomona College, The Breach, The Monsanto Years, The True Cost, The Wisdom to Survive, as well as other selections. Many of the filmmakers and other special guests will attend the screenings. [Film]
• Envision – VisionLA ’15 Closing Celebration hosted by Arts Earth Partnership, featuring poetry by LA Poet Laureate Luis Rodriguez, music by DJ Jedi, and an installation dance/concert by String Theory at La Plaza de Cultura y Artes. [Performance/Music]

VisionLA ‘15 presents Art Makes Change, a group exhibition of 60 local artists whose work strives to bring awareness to the climate crisis through various fine art mediums. The show will feature over 200 pieces of fine art, sculpture, photography and site-specific installations that inspire, provoke, confront and bring to light the many issues plaguing our world today. All works are for sale. Co-curated by Dale Youngman and Lilli Muller, two long-time Downtown curators, the exhibit – split into four themes of EARTH, WATER, RECYCLE and AWARENESS – illustrate how art can create and promote change by focusing on environmental topics including sustainability, reducing emissions, the California drought, ocean pollution, endangered species, activism, etc., while also reminding us of the beauty of the planet we need to protect.