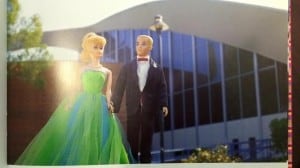 Today a colleague showed me a special book; it was a Barbie retrospective, showing classic Barbie dolls in settings in and around LA. She said she’d brought it to school to show the kids, because the backdrop of “Barbie goes to the Prom” photo was our school auditorium: The Robert Frost. I took a picture of the page and posted it on my Facebook, garnering a few likes and comments.

I was bequeathed my first Barbie from a slightly older girl who lived nearby to the Brentwood apartment of my birth to seventh years. What she gave me was an original Barbie, in a red, faux patent-leather looking case. Barbie had those original hard, unbendable legs, with little cylinders poking out of the feet; designed to hold shoes on better. Alas, just like when my boys were little infants, the shoes never stayed on well. She had on THE original black and white striped bathing suit, and came with some other clothes changes, too. There were tiny hangers on which to suspend the clothes in a closet-like compartment.

Little did I know, that such a doll could fetch thousands of dollars years later; when I was living in Tokyo, a storefront in Shibuya stated that vintage Barbies would be bought and sold for three-thousand US Dollars a piece. To this day, I lament that at some point after my mother’s death, the majority of my Barbie’s slipped though my grasp – they disappeared, and I’ll never know how, or why. All I know is that when I finally came back from Japan in 1988, the house had been sold, and most of the Barbies were gone. I still have a few of them, but they’d already been passed on to, and passed over by, my younger sister.

Through the years, the Barbies became more user friendly; the joints were bendable, and dealing with the hairstyles was always a favored activity. After my time, they came out with various ethnically diverse Barbies, which I would bestow as gifts. I’d make a point of buying a Barbie for daughters of friends and relatives. I strived to give a kid her first Barbie; loved beating moms of girls to the dirty deed. Modern parents, concerned with purported negative effects of such a toy on their little darlings, can ironically be the same parents who favor iToys over action figures for their little boys and girls. My boys used to play the heck out of an action figure, creating little stories and scenarios…no journey from the house was complete without an action figure/doll/Barbie equivalent along with us.

People blame Barbie for creating self-esteem issues in girls – how many really do have hour-glass figures like that? I blame Barbie more for setting off the first instance of my hoarding sensibilities. I began to collect the dolls, clothes and other accoutrements. I had a Barbie car and house, too. The deal with the clothes was that we had a local store called Akron, located on Sepulveda just south of National. They’d occasionally have a sale on Barbie clothes. Sale items were displayed – if you can call it that – in elevated troughs, much like those at Costco, but with a sort of black, cast-iron fence around the top so things didn’t fall, and an empty space underneath. My mom would tell me to sit underneath, and as she clawed through the stash – she’d throw down this or that packaged outfit and ask me if I already had it, or “needed” it. She’d buy like ten of them, and tell me in the car going home that I “couldn’t have them all at once,” and attempt to “hide” them up in her closet. Not a wait-for-Christmas type of family, I’d regularly raid the stash and get the clothes when I thought Barbie needed a new outfit.

Oh, and how I played Barbies with my friends! A girlfriend would come over, and we’d take out all of the Barbie paraphernalia and set up house. We used open encyclopedias to create a huge courtyard surrounding the two-story Barbie house, which contained a little kitchen, bedroom and living room. Gosh I loved that house; I think it was called, “Barbie’s Dream House,” but it was really my dream house. I made a circle big enough so I could sit inside it with another girl, and we could make up dialog between the dolls, or just talk while changing the dolls’ clothes. Usually, just when we were gaining in our stride, the friend’s mom would come to pick her up, and all would be for naught. I always felt frustrated when (what has come to be called) “the play date” was over, and I’d have to put away the whole shebang. You see, I never thought of the play as make-believe; the build out of the play space felt like putting down permanent roots.

I remember it being difficult to put clothes on the Ken dolls. Ken and dark-haired (the hair was painted on the guy dolls) Allen were the dudes that Barbie and her be-freckled friend Midge dated. The button-down shirts were hell for little fingers to fasten, and the pants would stick to the legs as they were pulled up. The boy pants were always missing a button or this or that, and I don’t recall the little loafer shoes staying on very well either. Consequently, I tended to leave the male Barbies naked in little beds I made for them. Over the years I wondered if that was my version of the “woman barefoot in the kitchen” ideal; mine was the “man naked in bed” counterpart. Female readers, if you’re ever out late and find your guy in bed in his birthday suit when you get home…you’ve got you a little Ken syndrome.