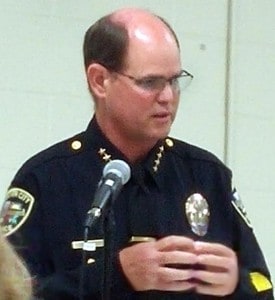 Four Culver City police chiefs – three former and one current – told their stories at the Historical Society’s final Quarterly meeting of the year.
Chief Scott Bixby, pictured left,  told the crowd of 75 his history with the CCPD began when he was a child in the Mar Vista Projects and Policeman Bill came to his school. “He turned on his siren,” Bixby said. “It impressed me so much I said, ‘Someday, I’m going to work in the Police Building,’ and I never changed my mind.”
Bixby has been with the CCPD for 36 years in various guises, including one brief experience with the Fire Department, which he regretted almost immediately and is still grateful to the CCPD for accepting him back. In a classic working-his-way-to-the-top manner, he rose through the ranks and assignments, including his stint with narcotics in 1964, when he hauled in the then-largest cache of cocaine in the area.
He reached the top in 2014 when he became Culver City’s 26th Chief of Police.
“I feel so lucky,” he told the crowd, “I had the support of this community and city councils all the way. This is a great town.”
Captain Ron Iizuka took the audience through the history of police in the city with a slide show of photos beginning with Harry Culver in 1916.
Cptn. Iizuka said traffic was the chief concern in Culver City when he was a patrolman. In fact, he is infamous in police and city circles for crashing his squad car at more than 100 mph in a 1980 police chase that broke his bones and internal organs, landed him in the hospital for four months and off the job for a year. He came back and now runs the traffic division that patrols in Ford Explorers armed with computers and deals with presidential visits, the Olympics and Cyclavia closures as well as police chases.
The presentation of slides and reminiscences of three ex-chiefs was a saga of chiefs who seldom lasted more than two years, new divisions, the growing city, changing face of crime and most of all the initial total absence of training. The former chiefs began their first patrols with only sketchy instructions. All praised Culver City for being among the first to initiate training and other innovations for their police department.
Chief Norm Traub said when he started with the CCPD in the 1950s, a red light on top of the old Culver Hotel was turned on as a call signal to officers.
“We bought our own uniforms and guns,” he said. “The city gave us a badge and headpiece for our hats. The 50s were quiet.”
That stopped in the 60s when Watts erupted and police patrolled with four officers per squad car. Other changes included Miranda rights for detainees and training for police officers. Former Chief Tom Kendra added that his term was before Fox Hills, MGM, Jefferson Blvd and the 405 and Santa Monica Freeways.

“They told us to expect a big leap in burglaries when the Santa Monica went though,” he said. The predictions proved to be true. “Burglars told us there was more money to be made in Culver City, plus it was easy to get out of town.”
Chief Frank Agusta had 60 police officers when he left. The department has 105 today, said Bixby, 44 percent are white and 21 percent female. They are kept busy training, investigating, and patrolling.
“Our emergency response time is 3 minutes,” he said, “a regular response time is 10 minutes.”
He is proud of his officers and said of 55,000 contacts in the last five years, 16 produced complaints. Of those two were accusations of excessive force that were not sustained on investigation and 4 were rude behavior.
“Our motto is Nobody Does It Better,” he told the Historical Society crowd.