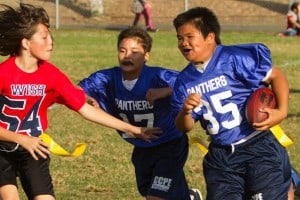 The Culver City Panthers 6th Grade Flag Football team continued its dominance of the 6th Grade Fiya League with a 44-6 victory over visiting WISH 3 on Friday. The Panthers jumped on the scoreboard on the first play of the game as David Lee scampered 55 yards on a reverse for a touchdown and a 6-0 lead. The Panthers shut down WISH on its first drive, taking over on their own 21 yard line. Running back Emmanuel Shaw ran for 38 yards on the first play of the second drive, and then running back Royce Williams sprinted 21 yards for a touchdown on the very next play and the Culver City route was officially on. Quarterback William Schultz connected with guard Abel Abebe for the two-point conversion, increasing the Panther’s lead to 14-0.

After a Leo Matsuoka interception on an errant WISH pass, William Schultz hit fullback Thomas Chee with a pass for a 12 yard touchdown. Schultz then ran five yards on a keeper to convert the two point conversion, giving the Panthers a 22-0 halftime lead.

The second half started just like the first half ended for the Panthers as running back Brandon Zeidman took the Panthers from their own 25 to the WISH 5 yard line. Running back Royce Williams took a pitch from Schultz and ran untouched into the end zone for his second score of the game. Braylen Harrell took a Schultz handoff and maneuvered his way into the end zone, completing the two point conversion and upping the Panther’s lead to 30-0.

WISH found the end zone on the next drive, making the score 30-6.

Culver City scored touchdowns on each of its seven possessions, and the defense continued to dominate. The Panther’s offensive line, including John Kim, Miro Garrett, and in the second half, Dennis Gibson and Jack Ralls opened up gaping holes. Defensively, Alba Navas and Mia McKinley shined, pressuring the WISH quarterback throughout the game.