I am avidly and proudly supporting both Anne Burke and Scott McVarish because of my many years of working with both of them and my high regard for what they have accomplished for our schools in past years.

Anne Burke, received the Volunteer of the Year award from the Culver City Education Foundation in 2011 for CCUSD’s office of Child Development when her children were in preschool. She served as the PTA president at El Marino Language School for two years and served on the Culver City Council PTA for the past 5 years. She was on the campaign committee for school bond Measure CC and is a founder of United Parents of Culver City.

As a woman of color, Anne will bring needed diversity to our school board and as a first generation college student; Anne brings a passion and focus on career readiness and college preparedness at the high school. Anne holds two Master’s degrees.

Scott McVarish is an innovative and proven leader in the CCUSD community. He is a founder of United Parents of Culver City, a parent run organization that has insisted on excellence from our schools through advocacy, information dissemination and political involvement.
Scott was also a leader on the measure CC School Bond Campaign committee. Scott holds a Masters degree in Public Policy and a J.D. (law) degree. Scott is a fluent Spanish speaker. 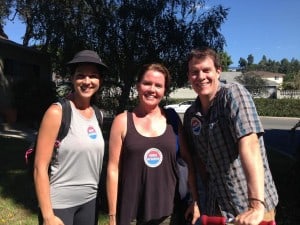 city officials but make no mistake, I have seen them both fight for what they believe is the right thing for our despite the threat of criticism.

Scott McVarish and Anne Burke are consistent, loyal, smart, very hardworking and have proven their dedication to our schools. Please go to the polls on November 3rd and move this school district forward.