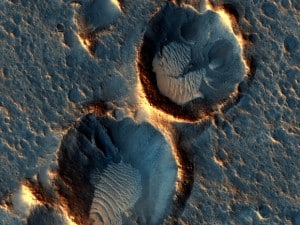 The novel of the same name, originally self-published by Andy Weir in 2011, used actual locations on Mars for the landing sites for its “Ares 3” and “Ares 4” missions. The landing site for “Ares 3” is on a Martian plain named Acidalia Planitia. The base for the “Ares 4” mission was set inside a crater named Schiaparelli.

Views of these two sites, and other locations pertinent to the fictional story, are in the latest weekly release of images from the High Resolution Imaging Science Experiment (HiRISE) camera on NASA’s Mars Reconnaissance Orbiter. They are available online at uahirise.org/martian

Each observation by HiRISE covers an area of several square miles and shows details as small as a desk. More than 39,000 of them have been taken since the Mars Reconnaissance Orbiter reached Mars in 2006. They are available online for anyone to explore, from the comfort of home, at hirise.lpl.arizona.edu

WHITE HOUSE ASTRONOMY NIGHT, OCTOBER 19. “There are a lot of mysteries left, 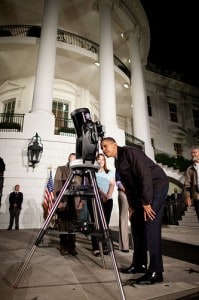 and there are a lot of problems for you students to solve—and I want to be a President who makes sure you have the teachers and the tools that you need to solve them,” President Obama said to middle school students, astronauts, and citizen scientists during the first-ever White House Astronomy Night in 2009 [https://www.whitehouse.gov/the-press-office/remarks-president-astronomy-event-with-students].

Since then, the President has recognized the unique contributions of scientists, engineers, mathematicians, tinkerers, and entrepreneurs, hosting five White House Science Fairs, the first-ever White House Maker Faire, and the first White House Demo Day. The Administration has also led efforts to improve opportunities for all students in science, technology, engineering, and mathematics (STEM) education to inspire students to pursue careers in science, technology, and innovation-driven disciplines.

On October 19, 2015, the White House will host another Astronomy Night. The event will bring together scientists, engineers, and visionaries from astronomy and the space industry to share their experiences with students and teachers as they spend an evening stargazing from the South Lawn of the White House.

The President expressed the hope that scientists and amateur astronomers throughout the country will join the White House in celebrating Astronomy Night by hosting their own events at observatories, schools, planetariums, museums, and astronomy clubs nationwide on October 19.

If you or your organization is interested in hosting an observing night or watch party in conjunction with the White House Astronomy Night, you are invited to tell the White House about your event at
www.whitehouse.gov/webform/astronomy-night-share-your-supporting-event

If you want to take new actions to help inspire and educate the next generation of scientists, engineers, and inventors, the President wants to hear from you. To tell about your new commitments and ideas, email the White House at:
[email protected]