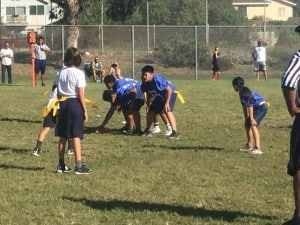 The game was tied at halftime, but the Panther offense was just getting started. On the opening drive of the second half, quarterback Schultz started the scoring with a 52 yard touchdown scamper on a broker play. The Panthers failed to convert the extra point, taking a 6-0 lead. Culver City threatened again on the next series, as Royce Williams ran 25 yards on a reverse, only to see that play called back on a flag guard penalty. After the Culver City drive stalled on the ten yard line, the defense took over. Four plays later, WISH failed to move the ball, and Culver City took possession.

Coach Maurice Shaw seemed relieved after the game explaining, “We looked a bit out of it during the first half, but the players really came on strong in the second half. I am so proud of the effort they gave.” Center Miro Garrett was understandably excited, “It is fun, come on it’s football. We get to hit people and it’s not only allowed but encouraged. We are so lucky to have Coach Shaw. I’ve learned so much already, and the results show how great a coach he is.”