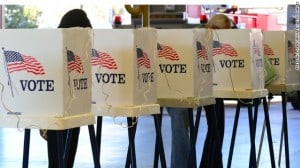 California eligible voter turnout among 18 to 24 year olds in the 2014 General Election was 8.2%. In Los Angles County only 6.8% of eligible 18-24 year olds voted. How do we address this civic indifference? By making voter registration easier? By creating more options to cast a ballot? Absolutely, these are critical parts of a solution.

Another key element is civic motivation – starting with young people. For decades, most K-12 students have not had access to effective civic learning opportunities that motivate and prepare them to be engaged participants in our democracy. And, when these opportunities have existed, their distribution has been unequal. Students in average-income income schools versus students in higher-income schools were:

An abundance of research shows that when K-12 students participate in relevant civic education and practice civic engagement they learn to care about and connect with their community and society and begin to understand that they have the power to affect change.

Within the past year, the Power of Democracy initiative led by Chief Justice Tani Cantil-Sakauye, has brought together statewide leaders including Secretary of State Alex Padilla, Superintendent of Public Instruction Tom Torlakson, and statewide organizations including CSBA, CalPTA, and CalChamber who are working together to make quality civic learning opportunities available for all students at all K-12 schools.

Local Civic Learning Partnerships have been activated in six counties throughout the state to work with school districts and community leaders to implement the Six Proven Practices in Civic Learning (the pillars of the K-12 Task Force recommendations) at all K-12 schools.

This event gave students an opportunity to ask their guests questions about local and statewide issues, learn how to get civically engaged, and explore the implications of civic participation on the judicial system. As part of the event, CCHS students showcased the positive things they are doing at their own school and throughout their community.