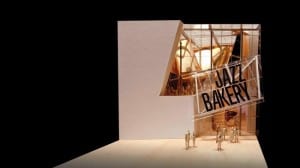 The next incarnation of the Jazz Bakery takes another small step toward reality with news that models of the new Frank Gehry-designed building will be unveiled as part of a retrospective dedicated to the architect at the Los Angeles County Museum of Art. The exhibition opens to the public on Sunday, September 13, 2015.

The design renderings continue Gehry’s long-held commitment to cutting-edge design with the two-story structure featuring an open facade along a zigzagging vertical line, a lobby framed by sweeping curlicues along the ceiling that recall the architect’s work on Walt Disney Concert Hall and an intimate, 266-seat theater framed by similarly curved organic lines. Plans also call for a 60-seat black box theater, an interactive museum dedicated to West Coast jazz and a cafe/bar space.

Gehry’s pro-bono involvement with the Jazz Bakery was first revealed when an intervention by the City Council of Culver City in 2012 secured a one-seventh of an acre space next to the Kirk Douglas Theater in Culver City for the nonprofit jazz venue’s upcoming use. Jazz Bakery’s founder and artistic director Ruth Price told The Times that Gehry had offered his services even earlier to the itinerant venue’s new home.

“Without sounding absurd, it’s kind of like a mini-mini Lincoln Center,” Price told The Times in 2011, referring to the giant New York City performing arts complex when describing the Bakery’s design. The venue’s forward-looking space also has a spiritual kinship with the new home for SFJazz, a nonprofit arts organization whose new permanent home for jazz opened in San Francisco’s Hayes Valley neighborhood to much fanfare in 2013.

The Jazz Bakery has been seeking a permanent location since 2009, when the venue lost its lease at the Helms Bakery complex, a mile northeast of the new location at 9814 Washington Blvd. Since then the Bakery has continued to present concerts around the city with Moveable Feasts at various locations, including Zipper Concert Hall at the Colburn School, the Musicians Institute in Hollywood and REDCAT in Walt Disney Concert Hall.

No opening date has yet been established for the Jazz Bakery at its new location; a capital campaign to secure the funding to begin construction is ongoing.

The Jazz Bakery will stage numerous concerts around Los Angeles through 2016, including co-presenting the annual Angel City Jazz Festival this fall and a 2016 series called “Concerts and Conversations With Southern California Jazz Legends,” a program funded with the support of a grant from the National Endowment for the Arts. –