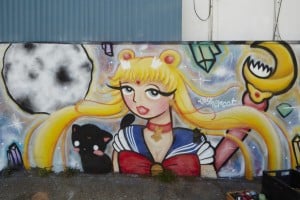 There is no greater feeling in life than when you suddenly spot a bit of unexpected geekdom sneaking in among your usually mundane daily routine. If you happen to stop for gas in Culver City you might just glimpse a hidden twinkle of magical girl goodness beaming your way as you glance over while fueling your vehicle. Sailor Moon, Sailor Jupiter, Sailor Chibi Moon, Luna, and Artemis brightly stare back to defend love and justice in a large mural wall next to the United Oil gas station on 12000 Culver Boulevard, a shimmering love letter to geeks who love Sailor Moon.

Mural artists YherCat, Deity, and KYM CBS teamed up to create this large-scale art piece showing their love of all things geek and girl power. YherCat mentioned to us in an interview that, “The mural was inspired by women empowerment. We are all female painters and encourage one another in our journeys and have an amazing time collaborating together.”

Sailor Moon was painted by YherCat, Sailor Jupiter by Diety, and Sailor Chibi Moon (or “Mini 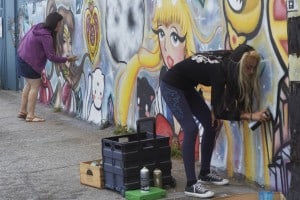 Moon” as she is known in the US version) by Kym CBS. The three finished their version of the Moon Kingdom on May 31st.

Muralist Deity is also part of an all-female art collective Few and Far, which strives to encourage women to use mural art as a artistic storytelling outlet. She was the first to mention the idea of Sailor Moon when YherCat approached her about collaborating for an all-girl mural on the wall. 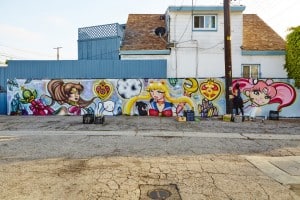 YherCat has been managing the art on this wall owned by the home next door for several years, with the murals changing about every six months or so—and always made by various collaborations between different artists. However, based on the popularity of this mural, she notes, “I have a feeling I will be keeping the Sailor Moon mural for a lot longer than 6 months, though.”