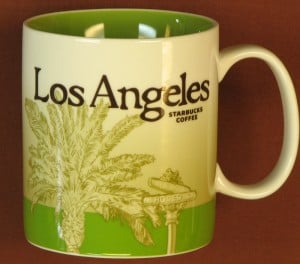 Collector that I am, one of my compilations is Starbucks mugs, which I dutifully pick up from every corner of the globe that I trot. Each carries a memory of the trip not only of the place, but of the specific Starbucks location where the cup was acquired. Abroad, Starbucks is a reliable, non-smoking, bastion of strong, free, Wi-Fi; clean, accessible, bathrooms; and a big, strong, cup of java. Places I travel sometimes specialize more in tea drinking, little demitasses of the brew, or downright poor coffee making techniques. I love my frequent international trips, but a nice Starbucks here and there doesn’t adversely affect my exploration of foreign lands either. Of note are the premium edition (pictured) Starbucks cups for San Francisco and Los Angeles, which very much symbolize the theme of my last essay: a comparison of the two towns.

The mug designers clearly ponder these things thoroughly; what symbols shall we put on the mugs? San Francisco must have been easy: a cable car. For L.A., Indeed there are a few palm-treed editions of mugs to be found, but I found it intriguing that the designers purposefully answered SF’s Cable Car with a red convertible automobile for Los Angeles. And therein lies the huge difference: L.A. is a car culture, and S.F. is more of a public transport culture. Even if my transplanted friend from New York still calls SF “a car town,” that may just be from the lens of a New Yorker. To them, everywhere else is a car town. And seriously, Japan’s fantastic mass transit system is great as long as you live in one of their massive urban centers; in the countryside, you need a car. London’s Underground and Overground trains unreliably shut down all or part of its grand system at the drop of a hat.

Thanks to rapid transit initiatives first put in place by Mayor Tom Bradley (which I learned during my viewing of the amazing film Bridging the Divide: Tom Bradley and the Politics of Race, produced by Lyn Goldfarb and Alison Sotomayor (www.mayortombradley.com), Los Angeles is beginning to take public transportation more seriously. However, we’re still a place where you are judged by what you drive, where we choose properties with no regard for proximity to public transport, and we are home of the drive-up valet park. I recently heard that property values in the Bay Area are actually influenced by how far your digs are from a BART station!

As for bicycles, riding one in the Bay Area is serious business, what with the hills everywhere; I’d walk out of our rented home and see people schvitzing their way between point A and B. I then arrived back in LA for our inimitable CicLAvia, much easier because 90% of our roads are flat! In a hill culture, you look down, and across. In my flatland LA culture, we find ourselves looking up and out. I wonder if we are bigger dreamers because of it?

Since my last essay, I noticed other differences between our northern and southern cultures. We are citrus and they are grape. Although debatable, Santa Barbara is Northern California already, because they are a grape area. We are music and they are literary. Both cities may be both, but many have remarked how LA seems to be more a center of music, whereas SF not only has authors, but also many publishers, and the ability to keep book stores alive better than we do here. We are a beach culture: home of surfing, skating, palm trees and sand, and the Bay Area is a harbor culture: home of ships large and small. The omnipresent bridges that connect the towns that make up “The Bay Area” make it physically and financially more difficult to flit back and forth. The notion of people and things departing and arriving from faraway lands makes the harbor culture more exotic, compared to our cozy, beaches and barbecue culture. People like LA because it is more like Israel, Japan, or Mexico; home away from home. People like SF because it is no place like home. SF is hilly like Rome, but it’s no Rome. Some streets feel like Hong Kong, but nothing’s like China. Sydney felt very much like San Francisco to me, but residents of both cities will argue against the comparison; Sydney may look, in some parts, like San Francisco, but SF’s culture is said to be more like that of Melbourne. Maybe that is true, what with Melbourne being the port city, whereas Sydney actually has the beaches. I’m on a mission to figure out how citrus, music and seashore might shape us in one way, and how grapes, literature and harbor shape us in another.

With two articles about Los Angeles and San Francisco in two weeks, one would think these are the only two cities to consider in the world. And this from world traveler moi – I’ve been averaging two international trips a year for most of my life. I’ve come to the conclusion that I couldn’t live anywhere else at this point, except, possibly, Israel, which is another story.

But why L.A.? Because I can sit here in what has become my million dollar home (long live the property-value enhancing “mansionization AND urbanization” of Culver City!) while I’ve slept. I write facing west, a balmy, sea breeze rolling into my dining room. My feet dip into the Pacific after a mere twenty-minute bike ride. I hop on our appropriately named “freeway” (it’s FREE – I just paid $22.25 for THREE Golden Gate Bridge crossings over July 4th weekend) to Pasadena for a dance. I ride toll-free in my shiny, red, foreign, sports sedan (just like the Starbucks cup, except my next car will be a convertible) over hill and dale, and into the sunset, for a day trip to Santa Barbara or Lake Arrowhead. Because L.A.’s the place.