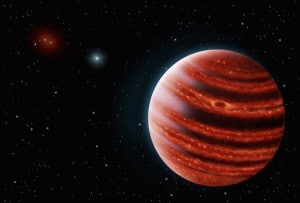 Using a powerful new imaging device, astronomers have espied a Jupiter-like exoplanet 100 light-years distant in the constellation of Eridanus. Unlike most planets found around other stars, 51 Eri b has been seen directly. The instrument employed to make the discovery has also made a spectroscopic analysis of the light reflected from the planet, and has detected gases similar to those in Jupiter’s atmosphere.

“This is the first exoplanet discovered with the Gemini Planet Imager (GPI), one of the new generation instruments designed specifically for discovering and analyzing faint, young planets orbiting bright stars,” says Franck Marchis, Senior Planetary Astronomer at the SETI Institute and member of the team that built the instrument and now conducts the survey. “GPI is far more sensitive than its predecessors. In fact, the 51 Eri system had been observed by four previous-generation instruments that all missed the planet completely.”

The host star, 51 Eri, is very young, a mere 20 million years old, and is slightly hotter than the Sun. The exoplanet 51 Eri b, whose mass is estimated to be roughly twice that of Jupiter, appears to orbit its host star at a distance 13 times greater than the Earth-Sun distance. If placed in our own solar system, 51 Eri b’s orbit would lie between those of Saturn and Neptune.

“51 Eri has everything we’re looking for in a target star,” notes Eric Nielsen, a postdoctoral fellow at the SETI Institute. “It’s relatively close and young. Indeed, the last dinosaur died 40 million years before this star was even born.”

Because GPI not only images exoplanets but also spreads their light for chemical analysis, astronomers can search for such common gases as water and methane in their atmospheres. Researchers had expected to see methane in directly-imaged exoplanets based on the temperature and chemistry of these worlds, but had failed to detect these molecules in large quantities using earlier instruments. However, the observations of 51 Eri b made with GPI have clearly revealed a methane-dominated atmosphere similar to that of Jupiter.

An extraordinarily complex instrument the size of a small car, GPI is attached to one of the world’s biggest telescopes—the 8-meter Gemini South instrument in Chile. It began its survey of stars last year.

“This is exactly the kind of planet we envisioned discovering when we designed GPI,” says James Graham, a professor at the University of California, Berkeley and Project Scientist for GPI.

Astronomers anticipate that 51 Eri b will be a benchmark for future atmospheric studies that seek to understand how planet formation in these extrasolar systems might be similar to the birth of the gas giants in our own system.

“Any planetary astronomer that inspects our data will conclude without the need of complex computer modeling that this is indeed a planet like our own Jupiter. We have found its first distant and younger cousin,” said Marchis.

“51 Eri b is the first one that’s cold enough and close enough to the star that it could have indeed formed the same way Jupiter did,” adds Bruce Macintosh, who spearheaded the construction of GPI and now heads up the survey. “This whole planetary system could be a lot like ours.”