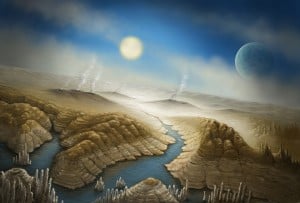 Scientists analyzing four years of data from NASA’s Kepler mission have released a new catalog of exoplanet candidates. The catalog adds more than 500 new possible planets to the 4,175 already found by the famed space-based telescope.

“This catalog contains our first analysis of all Kepler data, as well as an automated assessment of these results,” says SETI Institute scientist Jeffrey Coughlin who led the catalog effort. “Improved analysis will allow astronomers to better determine the number of small, cool planets that are the best candidates for hosting life.”

The Kepler space telescope identifies possible planets by observing periodic dips in the brightness of stars. However, confirmation of their true planetary status requires observations by other instruments, typically looking for slight shifts in the motion of the host suns. Historically, the overwhelming majority of Kepler’s discoveries have turned out to be actual planets.

The new catalog includes 12 candidates that are less than twice Earth’s diameter, orbiting in the so-called habitable zone of their star. This zone is the range of distances at which the energy flux from the star would permit liquid water to exist on the planet’s surface. Of these candidates, Kepler 452b is the first to be confirmed as a planet. At a distance of 1,400 light-years, Kepler 452b accompanies a star whose characteristics are very similar to the Sun: it is 4 percent more massive and 10 percent brighter. Kepler 452b orbits its star at the same distance as Earth orbits the Sun.

“Kepler 452b takes us one step closer to understanding how many habitable planets are out there,” notes Joseph Twicken, also of the SETI Institute and the lead scientific programmer for the Kepler mission. “Continued investigation of the other candidates in this catalog and one final run of the Kepler science pipeline will help us find the smallest and coolest planets. Doing so will allow us to better gauge the prevalence of habitable worlds.”

Kepler 452b has a better than even chance of being a rocky world on the basis of its size and the type of star that it orbits. It falls into a class of planets that are between the size of Earth and Neptune. While these are the most abundant type of world found by Kepler, our own solar system does not boast such a planet.

Intriguingly, while similar in size and brightness to the Sun, Kepler 452b’s host star is 1.5 billion years older. It therefore can give us a peek into a crystal ball showing a possible future for Earth.

“If Kepler 452b is indeed a rocky planet, its location vis-a-vis its star could mean that it is just entering a runaway greenhouse phase of its climate history,” says Doug Caldwell, a SETI Institute scientist working on the Kepler mission. “The increasing energy from its aging sun might be heating the surface and evaporating any oceans. The water vapor would be lost from the planet forever.”

“Kepler 452b could be experiencing now what the Earth will undergo more than a billion years from now, as the Sun ages and grows brighter,” Caldwell adds.