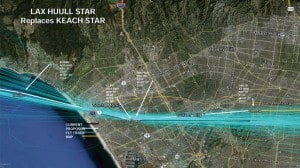 During daytime operations, aircraft arriving from the North and West to LAX follow the conventional flight path SADDE SIX. There will be 3 new satellite based Standard Terminal Arrival Routes (RNAV STAR’s) called CRSHR, IRNMN, HUULL. All 3 arrival routes converge as one path west of Santa Monica so they will follow the same path over Culver City. Two new waypoints have been created and define the path over Culver City: Aircraft fly from CLIFY, near the Santa Monica Airport to DAHJR, near Redondo & Blackwelder east of Culver City.

The daytime path over Culver City is predicted ON AVERAGE to be the same height as current operations. It 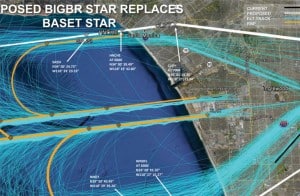 is also slightly North– it enters Culver City at Overland and Venice and exits through Hayden Tract – It flies over the police station instead of Carlson Park. A possible benefit of the new RNAVs is that the aircraft are continuing thier Optimized Profile Descent (OPD) which can potentially delay noise causing landing preparations, such as lowering flaps, until after DAHJR. Previously they exited the RNAV over Santa Monica Airport and started slowing down over Culver City.

During nighttime operations, aircraft arriving from the East will overfly Culver City from TOMYS, near Dr Maya Angelou Community High School, and fly over Santa Monica’s CLIFY. This arrival path is the BIGBR STAR and is north of the previous nightime arrival path– It enters Culver City over West LA College and exits east of Tito’s Tacos. This will also be 1000 ft lower. Five % of Culver City’s overflight will be by this route.
Nighttime and East Flow Arrivals – BIGBR

Below are the 2 arrival paths in a zoomable map. Red is the daytime route from west to east which will carry ~95% of traffic, Black is the nightime east to west.

For an interactive map go to  http://bit.ly/1OkRHpN