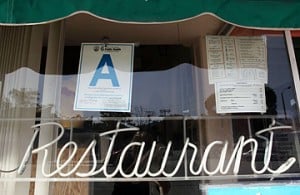 Los Angeles County health officials could soon be serving up some changes to the restaurant grading system. Facilities that receive an A grade are considered to be “generally superior in food handling practices and overall food facility maintenance” by the county. Restaurants that fail to notch a C grade will be assigned a number score from zero to 69. San Diego and San Bernardino counties are also among those in California which use an ABC grading system. It could also allow many places to stay in business despite major health threats.

A grade (A, B, C) or score card will be issued to each facility at the end of all routine inspections. The card issued will be based upon the score received on the Food Official Inspection Report. The grading is calculated as follows:

A facility receiving a score less than seventy percent (70%) will be issued a score card and not a grade card. The score card will indicate the actual score received.