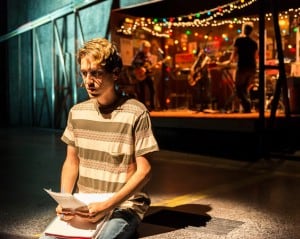 Rock musical “Girlfriend” opens at the Center Theatre Group/Kirk Douglas Theatre this Sunday, July 19 at 6:30 p.m. Featuring a book by Todd Almond and music and lyrics by Matthew Sweet, the rock musical about first love will continue through August 9. Previews began on July 12.

Reprising their roles from the 2013 Actors Theatre of Louisville production of “Girlfriend” are Ryder Bach (Randy Newman’s “Harps and Angels” at the Mark Taper Forum) and Curt Hansen (“Parade” at the Taper and “Next to Normal” at the Ahmanson). The director is Les Waters, who directed the Actors Theatre production, as well as the world premiere production at Berkeley Repertory Theatre.

The scenic and costume designs for “Girlfriend” are by David Zinn, lighting design is by Ben Stanton and sound design is by Jake Rodriguez. The music direction is by Julie Wolf and choreography is by Joe Goode. Wolf also conducts the band, which is comprised of Vivi Rama on bass, Janet Robin on lead guitar, Jyn Yates on drums and Wolf on keyboard and guitar. The production stage manager is Paul Mills Holmes.