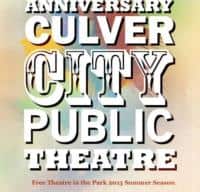 Culver City Public Theatre is happy to announce its 17th summer season of free theatre. Every Saturday and Sunday from July 18th through August 23rd, the public is invited to enjoy an afternoon performance under the trees in lovely Carlson Park.

First up at noon will be our popular Children’s Popcorn Theatre. Long time member Eric Billitzer, who has acted in countless CCPT productions through the years, has meshed together two of the Brothers Grimm’s fairytales into The Golden Bird and the Dancing Princesses. CCPT member Ria Parody Erlich, whom audiences will remember from Little Women and Leading Ladies will be directing. Golden feathers, a talking fox, the queen’s extensive shoe collection and the wisdom of the royal butler and shoemaker are all in play, leading through some silly situations to eventual happiness in the kingdoms of Aurorium and Gardinerium. The tradition of CCPT’s appeal to kids and their adults alike continues.

Our main stage play is Moliere’s The Would-Be Gentleman, a classic farce in a series of episodes that revolve around Monsieur Jourdain and his quest to become something he is not: a gentleman. An array of tricksters take advantage of his social ambitions to the amusement of everyone except Madame Jourdain, who keeps her feet firmly planted in reality. Director Molly Gilman has interspersed the episodes with music and dance interludes, as were performed in the period, but with the occasional contemporary touch.

Bring a blanket or a chair, bring a picnic if you like, bring your family, friends or your whole birthday party – our audiences span all ages. Parking is free, on the park side of the street please, to respect our neighbors. Bicycling is encouraged. Come back as many times as you like. ADMISSION IS FREE

The Golden Bird and the Dancing Princesses – 12 noon

The Would Be Gentleman – 2 pm