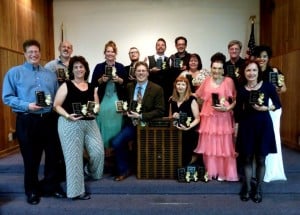 Kentwood Players, the community theater group based at the Westchester Playhouse, was founded in December 1949 by Jan and Arky Marcom. At the end of each season, all Kentwood Players members in good standing who have seen all six shows vote by secret ballot and then the group presents their annual Marcom Masque Awards to the winners in each category at an entertainment-filled awards ceremony. The first Marcom Masque Awards were presented for the 1957-1958 season with “Cat on a Hot Tin Roof” winning the award for Best Play.

For the 2014-2015 season, every cast member and technical designer for each show of the season – The Hollow, Sordid Lives, Orphans, Into the Woods, An Ideal Husband, Mame – was nominated for a Marcom Masque Award in appropriate categories. This year’s Marcom Masque Awards Ceremony was held on Saturday, June 27, 2015, and Kentwood Players is pleased to announce the winners of our Marcom Masque Awards:

During the awards ceremony, Certificates of Recognition were presented by Shawn K. Summerer, Kentwood Players’ Production Manager, to all members who worked behind-the-scenes on two or more productions during the season. Kentwood members who have reached their 10th, 15th or 25th membership anniversary were announced and pins were presented by Susan Goldman Weisbarth, Kentwood Players’ Vice President of Membership.

To meet the “Brighton Beach Memoirs” production team and learn more about Kentwood Players and what goes on at the Westchester Playhouse, the public is invited to attend our general membership meetings, which are free and held on the third Wednesday of each month at 7:30pm at the Westchester Playhouse, located two blocks west of the San Diego Freeway and two blocks north of Manchester at 8301 Hindry Avenue in Westchester, CA 90045.