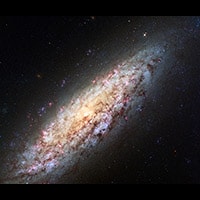 Space is big, dark, and lonely. But some parts of it are more lonely than others.

Most galaxies are clumped together in groups or clusters. A neighboring galaxy is never far away. But one galaxy, known as NGC 6503, has found itself in a lonely position, at the edge of a strangely empty patch of space called the Local Void.

The Local Void is a huge stretch of space that is at least 150 million light-years across. It seems completely empty of stars or galaxies. The galaxy’s odd location on the edge of this never-land led stargazer Stephen James O’Meara to dub it the “Lost-in-Space galaxy” in his 2007 book, Hidden Treasures.

NGC 6503 is 18 million light-years away from us in the northern circumpolar constellation of Draco the Dragon. It is some 30,000 light-years in diameter, about one-third the size of our own home galaxy, the Milky Way. 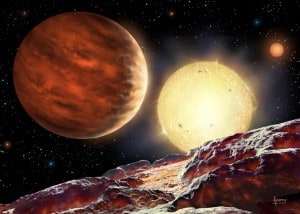 has discovered a new planet orbiting a star 1,000 light years away in our galaxy. Tom Wagg was doing work-experience at Keele University, Staffordshire, England, when he spotted the planet by finding a tiny dip in the light of a star as a planet passed in front of it.

“I’m hugely excited to have a found a new planet, and I’m very impressed that we can find them so far away,” says Tom, now aged 17. (It has taken two years of further observations to prove that Tom’s discovery really is a planet.)

Tom found the planet by looking at data collected by the WASP (Wide Angle Search for Planets) project, which surveys the night skies monitoring millions of stars to look for the tell-tale tiny dips (transits) caused by planets passing in front of their host star. 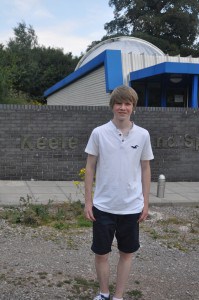 Tom’s planet has been given the catalogue number WASP-142b, being the 142nd discovery by the WASP collaboration. It is in the Southern constellation of Hydra the Water Snake. While astronomers worldwide have now found over 1,000 extra-solar planets, Tom is possibly the youngest ever to have done so.

“The WASP software was impressive, enabling me to search through hundreds of different stars, looking for ones that have a planet,” says Tom. The planet is the same size as Jupiter, but orbits its star in only two days. With such a short orbital period, the transits occur frequently, making such planets much easier to find.

Tom, a pupil at Newcastle-under-Lyme School, who has always been deeply interested in science, asked for the work-experience week after learning that Keele University had a research group studying extra-solar planets.

“Tom is keen to learn about science, so it was easy to train him to look for planets,” says Professor Coel Hellier, who leads the WASP project at Keele.

The planet does not yet have a name, though the International Astronomical Union has started a contest to name extra-solar planets. Tom is looking forward to making a suggestion for his planet.

An artist’s impression of Tom’s planet, WASP-142b, orbiting its star, WASP-142. The planet is depicted as seen from a hypothetical moon. A second, dimmer star is seen in the background. Being 1,000 light years away, the planet is too distant to obtain a direct image.