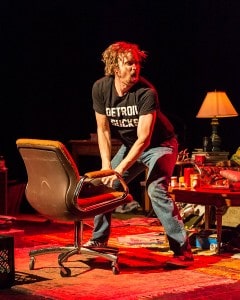 The world premiere production of “How to be a Rock Critic” opens Wednesday, June 17 at 8 p.m. and continues through June 28 in a limited engagement of 12 performances at the Center Theatre Group/Kirk Douglas Theatre. Based on the writing of Lester Bangs, the rock critic who reached iconic status in the 1970s with his passionate, intellectually honest writing, “How to be a Rock Critic” will be performed in the theatre’s rehearsal space, [email protected] Presented as part of DouglasPlus, it is a co-production with South Coast Repertory.

Written by Jessica Blank and Erik Jensen, performed by Jensen and directed by Blank, “How to be a Rock Critic” follows the brief and outsized life of Bangs, who wrote about the The Clash, Bob Marley, Lou Reed, Blondie, Iggy Pop, The Ramones and many more, in publications such as Rolling Stone, Creem, The Village Voice and Playboy. His writing was wild, funny, original, unpredictable and dedicated to stripping away the marketing jargon surrounding the artists.