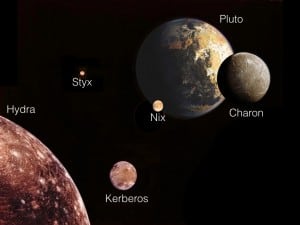 Much ink has been spilled over Pluto’s reclassification as a dwarf planet. And yet, such discussions have not diminished scientific interest in Earth’s most distant cousin. A new study is the first to reveal fascinating details about the orbital and rotational patterns of Pluto and its five known moons.

The study, published in the June 4, 2015, issue of the journal Nature, describes a system dominated by Pluto and its largest moon, Charon, which together form a “binary planet.” Four smaller moons orbit this pair. The paper reports the techniques used to discover the two smallest moons, Kerberos and Styx, and also provides a detailed description of the strange and unpredictable rotational states of the two slightly larger moons, Nix and Hydra.

Later this summer, NASA’s New Horizons spacecraft will pass by Pluto and its five known moons, providing the most detailed look at this planetary system to date. Kerberos and Styx were discovered in 2011 and 2012, respectively, while Nix and Hydra were first discovered in 2005.

“Like good children, our moon and most others keep one face focused attentively on their parent planet,” said Douglas Hamilton, professor of astronomy at the University of Maryland and a co-author of the Nature study. “What we’ve learned is that Pluto’s moons are more like ornery teenagers who refuse to follow the rules.”

The imbalanced and dynamically shifting gravitational field created by Pluto and Charon sends the smaller moons tumbling in unpredictable ways. The effect is amplified by the fact that the moons are roughly football shaped, rather than rounded spheres. The findings are the result of a comprehensive analysis of Hubble Space Telescope data regarding the orbits and properties of the four smaller moons.

In contrast to these seemingly random rotational motions, the moons follow a surprisingly predictable pattern as they orbit the binary planet formed by Pluto and Charon. Three of them—Nix, Styx and Hydra—are locked together in resonance, meaning that their orbits follow a clockwork pattern of regularity. The same effect can be seen in three of Jupiter’s large moons.

“The resonant relationship between Nix, Styx and Hydra makes their orbits more regular and predictable, which prevents them from crashing into one another,” Hamilton said. “This is one reason why tiny Pluto is able to have so many moons.”

The study also revealed that Kerberos is as dark as charcoal, while the other moons are as bright as white sand. “This is a very provocative result,” said lead author Mark Showalter, a senior research scientist at the SETI Institute. Astronomers had predicted that dust created by meteorite impacts should coat all the moons evenly, giving their surfaces a uniform look.

“Prior to the Hubble observations, nobody appreciated the intricate dynamics of the Pluto system,” Showalter said. The New Horizons flyby in July may help solve the mystery of Kerberos’ dark surface, and will refine scientists’ understanding of the odd rotational and orbital patterns uncovered by Hubble. The New Horizons team is using Showalter and Hamilton’s discoveries to help guide science planning efforts.

Among other expected insights, a more detailed study of the chaotic Pluto-Charon system could reveal how planets orbiting a distant binary star might behave. Although many exoplanets have been found to orbit binary stars, these star systems are too far away to figure out their rotational patterns using existing technology.

“We are learning that chaos may be a common trait of binary systems,” Hamilton said. “It might even have consequences for life on planets orbiting binary stars.”