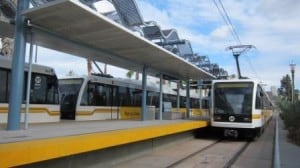 When Los Angeles voters approved Measure R in 2008, a half-cent sales tax expected to generate $40 Billion in funding over 30 years, they kicked off an historic rail expansion that is transforming Los Angeles. Today, there are five light rail projects currently under construction (Crenshaw/LAX, Expo Line Extension, Purple Line Extension, Gold Line Extension and the Regional Connector in Little Tokyo. Other projects expected to be funded by Measure R returns include the Green Line expansion, the I-405 Corridor transit project, as well as highway improvements.

In gearing up for an exciting election year in 2016, preliminary conversations have started around another voter-approved sales tax for the ballot next year. Experts, decision makers, advocates and elected officials came together to discuss the potential ballot measure, dubbed “Measure R2” during this pre-ballot period, for the 7th annual Transportation Conversation sponsored by MoveLA on Earth Day April 22 at Union Station. Panelists from across the County representing a variety of communities and interest groups spoke about their own priorities as well as the region’s best interests to a crowd of approximately 600 attendees. Mayor Garcetti and former Mayor Villaraigosa were both highlighted speakers. Topics including safety, sustainability, health, equity, goods movement, disabled access, rideshare, greenhouse gas emissions, affordable housing, driverless vehicles, and economic development all bolstered a recurring theme of what the “new” Los Angeles would look like.

The ballot measure has not yet been approved by the Los Angeles County Metropolitan Transportation Authority (“Metro”) but a draft expenditure plan is expected to be released this June. In 2008 Measure R was placed on the ballot and passed in a relatively quick span of time, with minimal discussion or debate from the public and various stakeholders and no allocations made to active transportation. Now in 2015 a pending ballot measure has become a catalyst for differing and sometimes competing interests in how Los Angeles could—and should—look in the next 30 years. Transportation systems impact every one of us in every aspect of our lives, including housing, food, jobs, education, services and the economy.