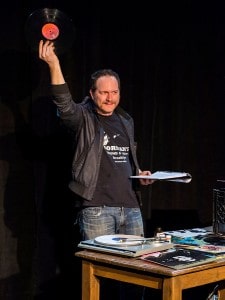 Rehearsals begin May 26 for the world premiere production of “How to be a Rock Critic,” based on the writing of Lester Bangs, the rock critic who reached iconic status in the 1970s with his passionate, intellectually honest writing. Performances at the Center Theatre Group/Kirk Douglas Theatre begin June 17 and continue through June 28, 2015, in the theatre’s rehearsal space, [email protected] Presented as part of DouglasPlus, “How to be a Rock Critic” is a co-production with South Coast Repertory.

Written by Jessica Blank and Erik Jensen, performed by Jensen and directed by Blank, “How to be a Rock Critic” follows the brief and outsized life of Bangs, who wrote about the The Clash, Bob Marley, Lou Reed, Blondie, Iggy Pop, The Ramones and many more, in publications such as Rolling Stone, Creem, Village Voice and Playboy. His writing was wild, funny, original, unpredictable and dedicated to stripping away the marketing jargon surrounding the artists.

Jessica Blank and Erik Jensen are actors, writers and directors, and together have authored “The Exonerated,” a play based on interviews with over 40 wrongfully convicted death row inmates in the United States (Lortel, Outer Critics Circle, Drama Desk and Ovation Awards, among others). Blank and Jensen’s documentary play “Aftermath” was based on interviews conducted with Iraqi civilian refugees in Jordan and directed by Jessica (a New York Times Critics’ Pick and was nominated for two Drama League Awards).