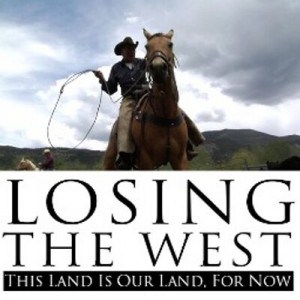 ‘Losing the West” is a documentary about the protection of open space and agricultural lands, illustrated by the story of Colorado cowboy Howard Linscott, a gruff, chain-smoking 70-year-old who’s been ranching all his life. As we follow him across the magnificent Colorado Rockies, the film explores whether small ranching and farming can survive as they collide with inevitable population growth in the West and its dwindling natural resources.

As the U.S. population expands, who will raise our crops and livestock? How does this affect those living in urban settings? How can we preserve the water, fertile land and open space we all need? What changes can we make in our own communities?

Senator Ellen Roberts (R), Andy Lipkis, founder and president of TreePeople, representatives of the Colorado Coalition of Land Trusts, the Colorado Cattlemen’s Agricultural Land Trust, along with friends and co-workers of Howard Linscott.

Q & A Panel after the Film: How does this effect us locally?

Director Alex Warren:
AlexWarren has long been involved in conservation and humanitarian causes. She has written, directed and produced the documentary “Losing The West” to raise awareness of land use, water conservation, and sustainability practices.

Former Mayor Meghan Sahli-Wells:
As Culver City’s immediate past Mayor, Meghan Sahli-Wells is entering her fourth year as a member of the City Council in Culver City. She has championed initiatives to improve the lives of children in her community, and has led efforts to address water conservation, active transportation, affordable housing, homeless services, and comprehensive oil drilling regulations.

Executive Director of the Compton Jr. Posse (CJP) Youth Equestrian Program, Mayisha was born and raised in the South Bay and has been involved with horses since childhood. A Loyola Marymount Alum, Mayisha moved to the Richland farms area of the City of Compton and there the Compton Jr. Posse was created for at risk youth, to provide a year round after school program using equine science and equestrian activities to inspire youth to reach their personal, academic and career goals.