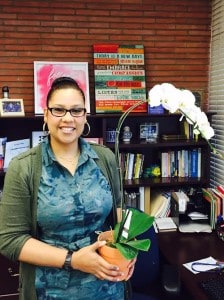 After a several-month stint as Interim Principal at Culver City High School, Lisa Cooper’s position was made permanent April 28 as the Culver City Unified School District Board of Education unanimously voted to name her Principal.

Cooper has been the school’s interim principal since October. She previously served for three years as the school’s Assistant Principal for Attendance, Activities and Discipline, where she directed and coordinated all student activities. In that role, she was responsible for overseeing and guiding the Associated Student Body organization and Student House Of Representatives, administering student discipline and behavior programs, collaborating with parents, students and school personnel to improve student attendance (SARB), and overseeing security and school safety.

She also spent five years at Culver City High School as the school’s Intervention Guidance Counselor, meeting with students to discuss academic performance and create a plan of improvement for them and providing academic, college and career and vocational counseling.

“Dr. Cooper has proven to be a very talented, collaborative and student-centered leader. This was especially evident during her service as “interim” principal, as she rose to the occasion and provided both stability and vision during a time of transition.” said CCUSD Superintendent David LaRose. “Lisa has been a respected leader at CCHS for many years and has developed strong and trusting relationships with our staff, students and families. Our lengthy hiring process affirmed that Dr. Cooper is the leader we want and need moving forward.”