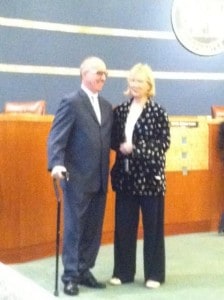 The annual ritual of ‘rotating the mayor’ – choosing among the five city council members to hold the office of mayor for the upcoming year – was the only action item on the agenda at the City Council meeting on April 27 ,2015.

The meeting began with two proclamations, designating the month of May as Historic Preservation Month and also as Biking Month. Comments not on the agenda included a ‘thank you’  to Public Works Director Charles Herbertson from Marta Zaragosa for resolving an issue that Los Angeles couldn’t, and a plea from June Lehrman and the LAX Oversight Committee for people to note and comment on jet noise.

(To provde info on flight noise to the city, please go to www.culvercity.org/~/media/Files/Articles/2015/CommentsToTheCity.ashx)

The highlight of the evening was the mayoral rotation, with Vice Mayor Mehaul O’Leary easily getting five ayes from his colleagues to succeed to the chair for the second time. Council member Andy Weissman was elected as Vice Mayor, a post that he has not previously served.

AS Mrs. Doneil Weissman had been unable to attend the meeting, both the Mayor and the Vice Mayor 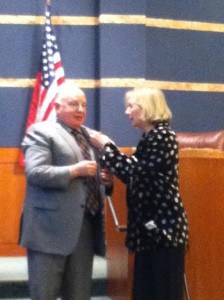 were “pinned’ by Mrs. Eileen O’Leary, Mayor O’Leary’s mother, who was present to celebrate the occasion.

Each of the council members congratulated the outgoing mayor, Meghan Sahli-Wells, for her leadership and abilities in office.

As has been traditional, the new mayor and vice mayor were elected as chair and vice chair of the Housing, Parking, and Successor Agencies.

Both O”Leary and Weissman will be termed out of office in the next election, having served two full terns with the city council.