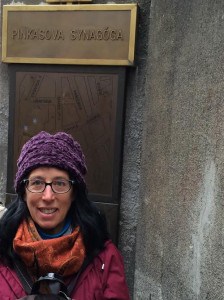 I’ve felt compelled to visit Central-Eastern Europe twice, and I even can be heard speaking of a third (and perhaps final) driving trip seeking remnants of Jewish life in Poland. After years of reading tomes upon tomes, after having lived through a life where most of these places were off limits for travel, I was mesmerized by the idea of actually setting foot in the places, and seeing things with my own eyes. I guess it is a reason why anybody would travel anywhere.

I have not seen all of the countries: no Russia, no Ukraine, no Lithuania, no Rumania, for example. I have also not spent long periods of time anywhere, although this trip has included my second trip to Poland, and another notch on countless trips to Germany. But I do come away with a sense, a taste of the places. I came in pursuit of this very perspective, so my mission has been accomplished. Still in Prague as I write this, I am compelled to express my thoughts now, while my mind is clear, and neither cluttered with the activities of everyday life back home, nor the romantic notions one carries of a place from afar.

Over two weeks and four essays for this column (as if I were a paid staff writer, which is NOT how we work, by the way), I have visited: Budapest, Hungary; Berlin, Germany; Warsaw and Krakow, Poland; Prague, Czech Republic. For me, this itinerary was constructed as part of my personal quest for a better understanding of Jewish-American cultural roots, which began when I was in college, studying, of all things, Japanese. The pursuit of that other culture caused me to want to know more about my own. As I studied both German and Japanese and Linguistics, in my first two years at UCLA, and prepared to go for a Junior Year Abroad to Japan, my own ethnicity seemed insignificant until I arrived at International Christian University, Tokyo. I sat in the pews of the Protestant Church that commanded the center of the campus. They gave us a packet of postcards to use for messages home, and I instinctively weeded out (and gave to another student) the one of the church. I found out that the one other Jewish student there, an exchange student from Penn who is my friend to this day, had done the same thing!

I had thrust myself into a life of being an outsider, looking in at Japanese culture, which started when I was ten, in 5th grade, and lasted to when I first set foot in Japan in 1978. It continued all the way to 1994, when I finally came back to the United States for good. While I was at that pursuit, I found myself gradually taking interest in my own roots as well. I felt grounded in my own culture, as a hyphenated American, along with my other hyphenated brethren. I have finally begun to understand, as Malcolm X believed, that words like “assimilation” and “integration” are as inappropriate as “tolerance” and “acceptance” are outmoded now in our day. Those terms imply rights granted from “the man.” We must now use words like “intercultural,” instead of “multicultural,” and “interdependence” instead of the more nationalistic “independence,” and translate those words into beliefs. It is through this lens that I look at Eastern Europe, and confirm that, perhaps, this thing with me being an outsider is actually part of my culture, and part of my being, not just in this life, but for generations.

Of the people I’ve met in these parts, the older people we’ve encountered have been, for the most part, dour. They’ve been through too much: wars, revolutions, reconstruction, totalitarianism, communism. They seem tired. The young people, however, the generation X, Y and Zers, are friendly, well-spoken, educated, cosmopolitan, and seem genuinely interested in creating a future without borders. They’ve traveled through what is now just “Europe” without customs and immigration procedures, and with English as the lingua Franca of tourism.

Historical sites to see here, compared to those more familiar to those of Western Europe, are alluring 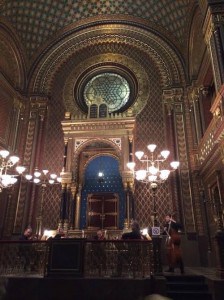 and significant, because they have been hidden behind the proverbial iron curtain for such a long portion of our 40-plus lives today. To see them from a Jewish perspective, is to understand the sheer “otherness” of our own culture, and juxtaposition it versus the majesty of the ruling powers-that-be, whether clergy or royalty, or modern governments with their sometimes totalitarian rulers. We heard, in hushed tones, that The Hungarian government is leaning towards nationalism. Poland, for all it’s strides, is still an overwhelmingly Catholic country, compared to many of its neighbors. The Czech Republic seems to grapple in shock as it absorbs the onset of massive numbers of international tourists. Germany, on the other hand, having had to rapidly meld it’s east and west, felt so clearly modern.

The languages in this part of the world are so distinctly, so tribally, unconnected to each other that one immediately understands why Zamenhof saw the need to create Esperanto, and why Yiddish, for Jews, flourished as a language, a literature and a culture throughout this region. Some may have called it a language of oppression, but, oppression leads to expression, through sometimes untraditional means, like art, which is perhaps why so many of our most famous classical composers, artists and performers come from this area.

When the iron curtain (as they say in Berlin, “The Wall”) was standing, the one thing people here weren’t able to do was express themselves freely. The Classical Arts as we know them, are so indigenous to this part of the world, and now the lid is off. The monuments, museums, ghettos and camps, have been transformed into artistic representations of themselves, and they tell us their stories. Ultimately, that’s why people come here – and this is the English teacher in me – to better understand the “setting” of those stories.