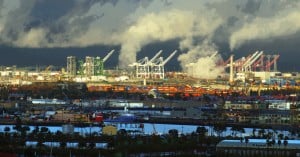 Congratulations to Richard Rownak who received a Special Merit award from the “City Scapes” Art Exhibition for his vision of Los Angeles Harbor at San Pedro. The winning artists will now be featured on the Light Space & Time website for the month of April 2015.
The art competition and the submission process for the artists began in February 2015 and concluded on March 27, 2015. The gallery received 676 entries from 17 different countries from around the world, including Australia, Austria, Canada, Ecuador, France, Germany, Ireland, Israel, Italy, Morocco, Netherlands, New Zealand, Russia, Singapore, Taiwan, Ukraine and the United Kingdom. In addition, the gallery received entries from 31 different states.

The art which was selected for the Special Merit Category is any art from the various media categories that we believe could have also been placed in the top tier of the entries selected.  For more info, go to www.lightspacetime.com/cityscapes-art-exhibition-april-2015/