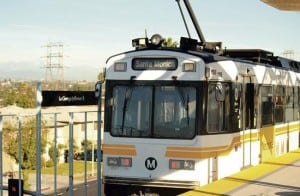 “Though we still have some time before the launch, the City of Santa Monica is assessing potential needs that may arise with the addition of this new mode of public transport,” she said, adding that department officials are working on identifying any unforeseen issues that might arise once the passenger trains begin rolling through.

“It’s difficult to gauge the precise impacts of the new Expo Line because it’s contingent on many factors such as volume of riders, how riders choose to arrive and depart from the Expo, as well as the proximity of their start point to the Expo and destination from,” said Lee. “It is important to monitor these factors, along with others and to be flexible with operational resources so issues can be addressed as they arise.”

Officials have been working on long-term infrastructure planning for the 3-mile stretch of tracks being built within the City’s limits for the past four to five years, including “identifying street striping, curbs, pedestrian crossings, bicycle interface and signage near and around the Expo stations and alignment,” Lee said.

Santa Monica also has applied for million of dollars in grant funds to pay for such needs as lighting, pedestrian improvements, bike facilities and “way-finding” to and from the three Expo Stations that will serve the City – 26th Street/Bergamot, 17th Street/Santa Monica College, and the Downtown Santa Monica Station at 4th Street and Colorado, Lee said.

“A key example is the Colorado Esplanade, which starts construction this month to rebuild Colorado Avenue from 5th Street to Ocean Avenue,” where widened sidewalks are being built “to safely accommodate the thousands of people walking to and from the station to Downtown and the Pier,” and to create “a protected bike connection to the Pier Bridge, and simplify vehicle movements to reduce congestion at 4th and Colorado,” said Lee.

In addition design work has begun on a comprehensive “way-finding system” to help drivers find parking, “to direct people walking and bicycling to the best routes, and to point out key destinations,” she said.

The system will be installed in phases, using grant and local funds over the next few years, Lee added.

“The City has also been working on first-last mile connection improvements to the Expo Stations and identifying priority projects and improvements for the near, middle and long term,” said Lee. “For example, near-term improvements have been made to bike facilities leading to Expo stations along 17th and 14th streets, and along Broadway.”

At 85 percent complete, the last leg of the project from Culver City to downtown Santa Monica remains on track for opening to passenger service in early 2016, although a more specific opening date won’t come until after the line is “turned over to Metro for pre-revenue testing,” said Gabriela Collins, spokeswoman for the Exposition Construction Authority, which is overseeing the work.

“Following testing, Metro will determine the opening date and will operate the line as part of the countywide rail network,” said Collins.

Construction work on all seven of the Expo Line Phase 2 stations is 75 percent completed and all seven bridges including in the project have been built, Collins said. Nearly 90 percent of the track has been installed and all at-grade track crossings also have been completed, she said.

At 17th Street and Colorado, where the track swings down from Metro-owned right-of-way property onto the middle of Colorado, some nearby businesses can’t wait for the project to be finished.