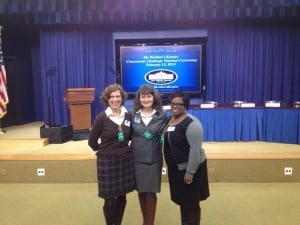 Mayor Meghan Sahli-Wells moved two steps forward for President Obama’s My Brother’s Keeper (MBK) initiative this month. The first step involved a local convening on February 3, including representatives from dozens of community groups. The second step involved accepting an invitation from the White House to participate in My Brother’s Keeper’s National Summit on February 12.
On February 3, participating groups including State Senator Holly Mitchell’s office, the LA County Department of Public Health, Upward Bound House, the Culver City Teen Center, CCUSD (Culver City Unified School District), Culver City Police and Fire Departments, the Baldwin Hills Conservancy, faith-based organizations and engaged residents met to begin step 3 of the MBK Challenge: conducting a policy review and forming recommendations for action.
The meeting began with a request for a complete inventory of city support services related to the mission of MBK, which is to “to implement a coherent cradle-to-college-and-career strategy for improving the life outcomes of all young people to ensure that they can reach their full potential, regardless of who they are, where they come from, or the circumstances into which they are born.”
In the Mayor’s initial Local Action Summit last fall, there was agreement to focus on two of MBK’s goals, plus add a third goal unique to the City:
1) To ensure all Culver City children enter school cognitively, physically, socially and emotionally ready.
2) To ensure all CCUSD students graduate high school. 3) To ensure that no Culver City child is homeless.
At the February local meeting, “We asked everyone, ‘What are you doing now, what’s your capacity, and what more would you be willing to contribute?’” said Mayor Sahli-Wells. “Some of these community partners had already collected data such as the number of homeless children in Culver City, and health outcomes among our teens. Other partners highlighted innovative programs serving Culver City children.”
For example, CCUSD’s Backpacks for Kids and Summer Lunch Programs serve an increasing number of Culver City kids in need of nutritious meals. Funding from the city of Culver City has enabled the non-profit Upward Bound House to expand its work with CCUSD, giving homeless Culver City children shelter, services, and helping their families find permanent housing. Neighboring West LA College offers free classes to qualified students in middle and high school, and has sent teachers to Culver High to work with students directly on campus. “The existing partnerships and programs in Culver City are extraordinary,” said Sahli-Wells. “We need to map these resources and ensure they are accessible to those who need them.” At the end of the meeting, committee members signed up to focus on one of the three goals of their choosing.

One week later, Sahli-Wells was at the White House, keeping company with some big league cities including Chicago, the District of Columbia, Ft. Worth, Minneapolis, New Orleans, Newark, Oakland, Pittsburgh and St. Paul. U.S. Attorney General Eric Holder and Senior Advisor to the President Valerie Jarrett opened the conference. Throughout the day youth and elected representatives from various cities, nonprofits such as the Harlem Children’s Zone, and foundations including the Annie E. Casey Foundation presented best practices.
“It was so valuable to connect with communities from all over the nation to share best practices and to discover additional resources that are available to move these initiatives forward. We returned with an even greater dedication to pursue our MBK goals in Culver City,” said Mayor Sahli-Wells.
My Brother’s Keeper Community Challenge In September 2014, President Obama issued a challenge to cities, towns, counties and tribes across the country to become “MBK Communities.” This challenge represents a call to action for all members of our communities, and mayors in particular, as they often sit at the intersection of many of the vital forces and structural components needed to enact sustainable change through policy, programs, and partnerships. The MBK Community Challenge encourages communities (cities, rural municipalities, and tribal nations) to implement a coherent cradle-to-college-and-career strategy for improving the life outcomes of all young people to ensure that they can reach their full potential, regardless of who they are, where they come from, or the circumstances into which they are born.