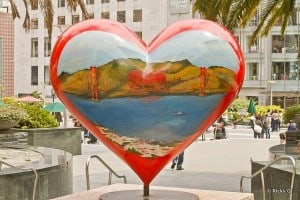 Ruth’s Truths started from a Facebook post about my travels almost two years ago. Today’s essay opens my 2015 spring travel series, which will span the globe from California to India to Europe and back.
After all these years, I have finally fallen in love with San Francisco. Having spent most of my life as a SoCal loving Angeleno, my travels to the Bay Area were only for business or for an occasional road trip. To me, “the city” was always just the tip of the peninsula that contained Union Square and Fisherman’s Wharf: the tourista portion that looked somewhat like New York when compared to anything we had here in Los Angeles. People dressed in snappy business attire walked brusquely amongst buildings stacked high and close together. When I was such a business person, I loved a day trip on the pre-9-11 shuttle from LA, but otherwise, the city felt “cold” to me. There was the perception of more public transportation than LA, but unless I was in New York or abroad, this Angeleno preferred a car, even with the hassle of parking in cavernous structures and paying the price to do it.

Since I traveled to SF so infrequently, I always wanted to eat the same things when I went there. It was always Chinese food, Italian food (especially, if you can call it Italian food: Zachary’s Chicago Pizza in Oakland) and tomato soup in a bread bowl at Boudin’s in Fisherman’s Wharf. No wonder I never fell in love with the city; I never gave it a chance. But then, my oldest son took up residence there for college about three years ago. For the entire first year and the better part of the second, I still treated the city as if I were an outsider.

Now that one of my sons lives there, I have reason to go more often, and show interest in the place. When I am up there missing my L.A. Dance nights, more often than not I’ve found places to partake of either Contra or Israeli dancing in or around the city. When you can pursue your hobbies on the road, you begin to make a place your home. Over this past year, I decided to get myself a reliable car, and overcome my fear of driving up there alone. There are relatively convenient buses, even less convenient trains, and downright unreliable and expensive air flights one can take to get between Los Angeles and San Francisco. But there’s nothing like being able to hop in your own car, get out onto the open road, and sail up to SF for a weekend in the comfort of your own space. Once I found the fortitude to get over being a wuss about driving alone, and had the apparatus to transport myself efficiently, new avenues of opportunity have opened up. I even appreciate the journey itself, what with knowing the good places to stop, and where I can get my comfort snack for driving: Gardetto’s garlic rye chips – ONLY consumed on the road.

With gas prices cheap right now, you can’t beat the price of the trip by car, and my new-found strength has extended to another aspect of the game: accommodations. Commercial options can be expensive, and friends’ sofas can be far away. Since the major reason for going to SF is to spend quality time with my eldest son anyway, what better place to stay than with him? Thanks to my son and his roommates’ hospitality, I am now able to temporarily inhabit space in what I fondly refer to as “Animal House.” Armed with a ton of antiseptic wipes, I move around the place comfortably. My trips are no longer few and far between, but rather, frequent and fast-paced.

So I am beginning to love the city as more of an insider, willing to invest in the process of getting to know a place. I bought a book which is not only well-written, but contains 49 different walks to do around the city, an homage to Hokusai’s 49 Views of Mt. Fuji. (Cool Gray City of Love: 49 Views of San Francisco, by Gary Kamiya). When I go now, for my “weekend” jaunts of late Friday night arrivals and midday Sunday returns, we take in at least one “view” and/or experience something NEW to either me, or my son. In January, we saw the white rows of buildings, the blue bay surrounding them, and the rampant green of Golden Gate Park from Moraga Hill. This past weekend, we finally went to the Japanese Garden and the De Young Museum, where people waited in line in the rain to pay money to view ART: Keith Haring. When we are hungry, we “Yelp” what we think we might like to have, and try a never-ending supply of unique eateries. And it is so endearing how every other person wears a black and orange SF Giants baseball cap.

Everybody knows that cities built on hills – from Rome to Jerusalem to Hong Kong – are bound to be beautiful, which is what sets San Francisco apart. When you are IN downtown San Francisco, you don’t feel it as much, although you do catch eyefuls of the bay between buildings as you traverse town in your chosen mode of transportation. I think the best views are from the varied heights of one hill or another from outside the city proper, looking across the bay. For example, Highway 1 (we call it PCH here) becomes this supposedly “ugly” (not to me) stretch of connected boxy houses and such as it nears San Francisco in the form of “19th Street.” But as you travel north across the “alphabet” streets between “Wawona” as “W” and “Irving” as “I,” you can actually see the top of the Golden Gate Bridge straight ahead, and simultaneously view waves cresting in the west.

Even if I hate it that San Francisco charges for every shopping bag, paper or plastic, from supermarkets to clothiers, you gotta’ love how the place looks, the range of activities you can do, the variety and quality of the food, and the bookstores on every block.