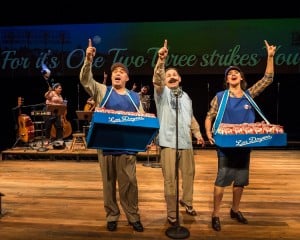 While watching the revival of “Chavez Ravine” at the Kirk Douglas Theater on Wednesday, Feb. 4, it occurred to me that ‘Culture Clash’ was not just the name of the theater company that created the piece, but really a complete metaphor. “Chavez Ravine” is a play, a concert, a history lesson and a brilliant illustration of how the simple life was consumed by the slick power grab. It’s required viewing.

It’s really one culture clash after another. The initial clash starts with the values of Maria Ruiz, a resident of the community that inhabits the ravine versus the values of Frank Wilkinson, the manager of the Los Angeles City Housing Authority seeking to replace the ‘slums’ with a modern housing project that he believes will improve the lives of the residents.  But before that can happen, the land is grabbed by the city for a baseball stadium by heavy handed corporate tactics. The marionette mayor, Norris Poulson, being worked by Chandler’s Los Angeles Times and the equally anti-populist Department of Water and Power, gives it all to Walter O’Malley for the Dodgers. Wilkinson is crucified as a communist before HUAC, and with a ballot that gets the people to vote against their own interests (Prop B for baseball) the fate of the ravine is sealed.

Opening with Vin Scully (in a dead-on perfect performance by Richard Montoya) announcing a Dodger game with Fernando Valenzuela (the equally exquisite Herbert Siguenza) on the mound, the ghosts of the ravine, Henry and Maria (Ric Salinas and Sabina Zuniga Varela) distract Valenzuela from the game with their tales of the houses and the lives that once inhabited this very space.

The company is dazzling in their fluidity – Montoya, Salinas and Siguenza each play almost a 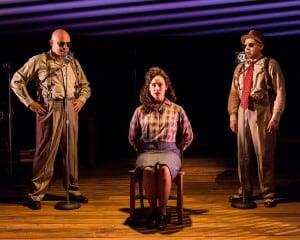 dozen different roles, with some scenes needing two costume/character changes and in less two minutes. While Zuniga Varela stays constant in the role of Maria, she ages and changes as the story moves back and forth through time, and also jumps nimbly though several other characters such as as the reporter from the Los Angeles Herald Examiner.

With a three piece band onstage backing up the action (Veneza Mari Calderon, Randy Rodarte and Scott Rodart) the play also uses screen projection of the places and people, expanding directly into history with photos of the Palo Verde and Bishop neighborhoods, headlines from the Los Angeles Times, and plenty of Dodger blue. 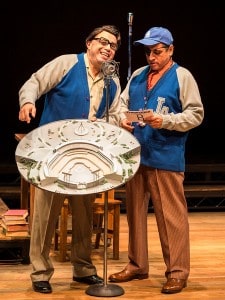 It’s a whirlwind – the local history of economic oppression and racism, broad slapstick comedy, jokes and political references that dance through the decades. In one scene, Maria implores a group of men sharing a trash can fire and a bottle to get to the polls before they close, so they can vote against Proposition B and save the ravine. But their response is to explain to her that they love baseball, and that the neighborhood is already dead, and fading into memory. The fingerprints of Culture Clash’s unique wit become evident in the dialogue – “Imagine a black man owning the Dodgers … Why that would be …Magic!”

In an evening that is by turns, angry, witty, heartbreaking and hilarious, the story of Chavez Ravine is one that too few Angelenos know. There isn’t a better way to understand history than to see it live onstage.