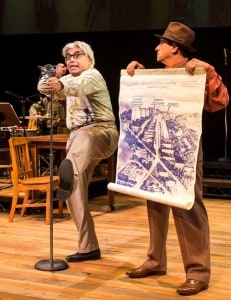 Ground breaking Latino theatre group Culture Clash’s “Chavez Ravine: An L.A. Revival,” opens next Wednesday (February 4) at the Kirk Douglas Theatre. Performances run through March 1, 2015. Energized with new material and music from the Rodarte Brothers, Culture Clash continues to examine the constantly changing landscape of urban Los Angeles, in particular, the potential transformation of a small, tightly knit neighborhood into what was initially to be a low-income housing project, but eventually became Dodger Stadium.

This revisited and reimagined “Chavez Ravine” is directed by Lisa Peterson (who was at the helm of the world premiere in 2003 at the Mark Taper Forum) and features Culture Clash’s Richard Montoya, Ric Salinas and Herbert Siguenza along with Sabina Zuniga Varela and musicians Vaneza Mari Calderón, Randy Rodarte and Scott Rodarte.