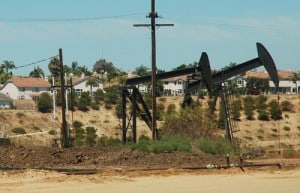 The Los Angeles City Planning Department’s Zoning Administrator is reviewing a proposal by oil producer Freeport-McMoRan to drill and redrill three wells at a West Adams oil production site on Jefferson Boulevard at Budlong Street. With wells only 60 feet from homes, this site is closer to homes than almost any other LA City oil drilling site and sits in one of the city’s most densely populated neighborhoods.

The Los Angeles Department of City Planning sets terms and conditions for proposals to drill wells and held a hearing on the matter on November 25th. Attendees, including Community Health Councils, requested a full environmental review on the drilling proposal to allow informed decision making. The operations have never undergone environmental review and Department of City Planning recently reported that the city’s regulations on oil production have not adapted to the changing industry or urban environment.

The Planning Department also stated they do not have the issue expertise necessary to update the city’s regulations. This lack of expertise is disconcerting since the Department is responsible for setting the terms and conditions of oil drilling. The Zoning Administrator continued the hearing until January 5 at the request of the local Council District Office. Councilmember Bernard Parks promised to convene a meeting between Freeport-McMoRan and community representatives in order to iron out differences and agree on a set of measures to mitigate the impacts of the operation.