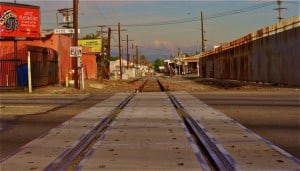 The L.A. County Metropolitan Transportation Authority (Metro) recently approved $2.8 million for a Rail-to-River Active Transportation Corridor (ATC) along Slauson Avenue from the Los Angeles River to the Crenshaw Metro line. Championed by County Supervisor Mark Ridley-Thomas, the proposed ATC would transform a currently blighted and underutilized right-of-way to a public active space for community use by providing 8.3 miles of pedestrian and bicycle infrastructure improvements, including a dedicated urban walking and biking trail, access improvements to adjacent Metro light rail stations, and potential for drainage and stormwater treatments.

Rail-to-River is part of a larger plan by Supervisor Ridley-Thomas to revitalize the neighborhoods and businesses surrounding Slauson Avenue. Residents who live around the proposed Rail-to-River project have long waited to give the area a facelift. Responding to the concerns, Supervisor Ridley-Thomas spearheaded the Slauson Corridor Revitalization Project—an undertaking aimed at making the area more pedestrian friendly and an attractive destination for local merchants and community residents. Other cities have seen similar projects improve economic development and boost retail sales.

To get the wheels in motion, Supervisor Thomas convened the Metro Board of Directors to approve initial plans for the project and identified and secured funding for the full implementation of the project. The Board will report back in May of 2015 to discuss the status of fundraising and the proposed plan for implementation.

For an in-depth overview of the project visit Streets Blog Los Angeles!