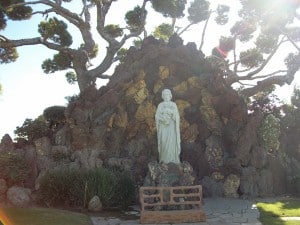 There is a feeling of order, safety and efficiency at Holy Cross Cemetery in Culver City. Surrounded by large, purposeful office buildings, and almost sideswiped by the 10 freeway, this 200 acre memorial park, owned and maintained by the Archdiocese of Los Angeles,has a peaceful, almost antiseptic air — call it corporate Catholic. The rolling hills are a perfect green, and the bouquets and decorations on the graves are tasteful and well cared for. Wind chimes tinkle in a tree overhead, and statues of holy figures, from the first Korean saint to the Virgin Mary and Child, are uniform and simply carved. The names of cemetery sections are marked on curbs in star block letters, diffusing the drama of phrases like “Blood of the Martyrs.”

On the Saturday I visit, the cemetery is busy. Families sit in squares around graves, laughing and discussing everyday subjects like workplace problems and children’s teething. A church official walks to his Honda, his white robe billowing in the soft breeze. Funerals are taking place in the large mausoleum chapel, and men and women in suits solemnly greet each other with a handshake and a hug. A man and woman go from grave to grave, cleaning the small flat stones carved with crucifixes and images of Jesus that cover most of the park. Two silent tractors sit in a field of recently displaced red dirt, indicating that the cemetery is expanding, and that the Catholic Church is still an important presence in Los Angeles.
I finally find the grotto, a beautiful, almost Disney-like place where many of the city’s film luminaries are buried. The volcanic stone of the grotto contrasts sharply with the brilliant blue sky. It is hard to find the celebrities’ graves, since unlike other cemeteries in L.A., they blend in with the rest and many have no flowers. A maintenance worker who has been hovering nearby helps me find Rita Hayworth and Bela Lugosi, although I never do find the lovely, tragic Sharon Tate. As I stand next to the figure of Bernadette praying, I look out over the rolling, perfectly maintained hills. There are many stories in these hills, diverse tales of people from many different continents, all united by a single religion and drawn to the city founded by their spiritual brethren many moons ago.

“The corporal works of mercy consist especially in feeding the hungry, sheltering the homeless, clothing the naked, visiting the sick and imprisoned, and burying the dead.”
–Catechism of the Catholic Church #2447

The Pueblo de Nuestra Senora de Los Angeles was founded in 1781 by Spanish Governor Felipe de Neve. The town was overwhelmingly Catholic and for the first forty years of its existence most citizens were buried in the cemeteries of Mission San Gabriel or Mission San Fernando. Over the next century and a half, several new consecrated Catholic cemeteries opened in Southern California. By the 1930s, most of the cemeteries were already filled. In 1939, the newly created Diocese of Los Angeles-San Diego opened Holy Cross Cemetery in Culver City, on almost 200 acres of land that had been part of the large land grant of Rancho La Ballona.

On Memorial Day, 1939, Holy Cross was dedicated by Archbishop John J. Cantwell. The land was touted to have an “excellent drainage system … and supplied with abundant water,” and to have “been carried out in accordance with modern, approved trends in Memorial Park development.” 1 Monuments and vaults were not permitted, only flat grave markers. Burials began immediately. Two of the first included a Dr Robert T. Williams, who had dedicated his life to the study of tuberculosis, and Mrs. Emma Berlinger, who died on a tour of her native Germany, the burial of her body delayed by the war.

The complex story of Los Angeles unfolded in some of the funerals held at Holy Cross. There was the internment in 1948 of Herman Burns, an African American veteran and father from a highly respected local family. In a crime that shocked the city, Burns and his two brothers were accosted by LAPD “special officers” after attending a dance at the La Veda Ballroom. Burns was beaten to death, one brother hospitalized with injuries, and another jailed, charged with having a rusty knife in his possession. A year later, Señora Luisa Olivera de Machado, a descendent of one of Los Angeles first families, was buried at Holy Cross. Almost fifty years before she had married Cristobal de Machado, the scion of the family that once owned Rancho La Ballona.

“A short, thickset man of brawny shoulders is at work laying a massive chunk of rusty red volcanic stone for the top of a 28-foot arch. He works quickly cementing the great slab into place, occasionally calling an order to one of his helpers. The he pauses a moment. The sun catches his face. He grins broadly. ‘I do not think of this year or next or 20 years from now or even 100. If in all that time one person looks on my work and feels joy and peace in his heart, then this is work well done.'”

All Catholics know the story of the miller’s daughter born in Lourdes. Bernadette Soubirous was a fourteen year old peasant girl who claimed to have been visited 18 times by a “small young lady” in 1858. She believed the “lady” was Mary, Mother of Jesus. The apparition asked that a chapel be built at the grotto in Lourdes where the visions occurred. This site has since become a shrine for Catholics worldwide. Man-made Marian grottos, featuring artificial caves, waterfalls, and statues of Mary, and often Saint Bernadette, are now important spots of veneration at many Catholic cemeteries.

Very few people know the story of Ryozo F. Kado, the man who built the grotto at Holy Cross. Kado was born in Japan, the son of a wealthy tea planter. He first came to America as a salesman, selling green tea door to door in Cleveland. After a few years, he moved to Los Angeles to study with Chotaro Nishimura, designer of the Royal Gardens in Tokyo, and considered one of “the world’s greatest craftsmen of stone.” 3\ Kado apprenticed under Nishimura and eventually married his daughter Hama, a well known seamstress. He worked for years out of Santa Monica, and soon began building grottos in the private homes of prominent L.A. Catholics, like Mrs. E.L. Doheny, before moving on to bigger projects at Catholic churches and institutions. In 1939, Kado built the famed “Lourdes of the West” shrine in Altadena, which was said to have been visited by 500,000 people the first year it was opened. Kado, raised a Buddhist, believed in the power of the grotto. He converted from Buddhism to Catholicism after completing his first shrine.

Then World War II came, sweeping away the life Kado and his family had built. The family was sent to the Manzanar Relocation camp in the Sierra Nevada foothills. Kado and his father-in-law attempted to beautify the desolate camp, building fountains and gardens using whatever raw materials they could find. After the war, Kado, Hama and their two children began to rebuild their lives. By 1954, Kado was designing and constructing the new grotto at Holy Cross, which he considered his “masterpiece.” He was also in charge of creating all “shrines, grottos, waterfalls and rock gardens” for the areas five Catholic cemeteries.

Once the elaborate grotto was constructed, it became the most desirable real estate for departed SoCal Catholics. One of the first celebrities to be buried there was the original Dracula — Hungarian born Bela Lugosi. Attended by only 60 mourners, including the director Ed Wood, Lugosi was buried in his famed Dracula cape while a Hungarian dirge was played on the violin. Since his burial, his unassuming grave has become a mecca for macabre fans. In 1990, pioneering psychobilly band The Cramps signed their new record deal with Enigma Records on the grave.

A true horror story reached its conclusion in August, 1969, at the funeral and burial of the pregnant actress Sharon Tate, victim of the Manson family. With the killers still unknown and on the loose, Tate’s funeral was held in the Chapel on the top of the hill at Holy Cross, while her family and husband, the director Roman Polanski, looked on. The highly emotional funeral, attended by the likes of Warren Beatty, Kirk Douglas, Yul Brynner and Peter Sellers among others, concluded with Tate’s mother bursting into tears as the officiate intoned, “Goodbye Sharon, and may the angels welcome you to heaven, and the martyrs guide your way.”

In August, 1977, Roman Polanski, who earlier in the week had pleaded guilty to sex with a minor and would soon flee the country, knelt at Tate’s simple grave near the grotto. A photographer, who had been hiding, waited until Polanski was kneeling and then stepped into the open and took eight photos. Polanski chased the photographer through the cemetery, shouting obscenities, and then snatched his camera, breaking the photographer’s leather strap in the process. The DA refused to press charges against Polanski, and the camera was returned without the offending film.

Many notables were interred in the grotto from 1960 through the ’90s, including Zasu Pitts, Jimmy Durante, Rita Hayworth, Bing Crosby, and Rosalind Russell. Others were placed in the vaults of the grand mausoleum on the opposite side of the cemetery, including funny man John Candy. In 1981, Effa Manley, who with her husband had co-owned the champion Newark Eagles in the old Negro Baseball League, was buried at Holy Cross. Perhaps the most joyous burial was that of jazz pioneer, Kid Ory, whose full New Orleans style funeral in 1973 included a Dixieland band. According to the L.A. Times:

“A 17 piece band marched ever more slowly than normal up the steep hill-for some of the men were elderly and needed wind for both the climb and the horns. Alton Pernell clad in black suit and derby in the New Orleans funeral style, his chest crossed by the society sash, led the slow procession to the grave- and the traditionally more rapid parade away from death. On the way down the hill, the band played a spirited ‘Didn’t He Ramble,’ with chords from ‘When the Saints Go Marching In’ mixed in on the warm winter air. At the foot of the hill the band broke into ‘Muskrat Ramble’ in a joyous beat and there was dancing around the band.”

Sadly, even this sanctuary for the dead was affected by the sex scandal that has rocked the Catholic Church for the past two decades. In 2013, it was revealed that in 2007 the Archdiocese of Los Angeles had appropriated $115 million from the diocese’s perpetual care fund. This fund, paid into by plot holders since the 1890s, is used for “the general care and maintenance” of the 11 cemeteries run by the Archdiocese. This $115 million was used to finance part of the $600 million dollar settlement the Church made with abuse victims. Many with loved ones buried at the cemeteries were appalled. The Church insisted the loss of the money would have no effect on graveyard maintenance, and that funds would be repaid and replenished with the sale of new cemetery plots.

If my recent visit to Holy Cross is any indication, this scandal has done little to slow the rate of burials at this popular cemetery. The rolling hills of the cemetery indeed house many secrets, tragedies and heartache-but the view from the Grotto is one of clean-cut peace.