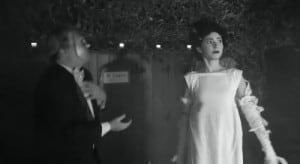 Culver City’s  musical treasure Bob Wayne has dressed up The Phantom of the Opera in a bit of fun with some “Monster Mash” rhythms for a Happy Halloween video on YouTube.

From Derek McCaw of Fanboy Planet  “I’ve always had a thing for cover songs that really mess with the original while still staying somewhat recognizable. And back in college, I heard a band that found a unique way to do it — taking well-known pop songs and recording them as if they were stuck in the early days of rock and roll.

That band was Big Daddy, and after some moderate success through Rhino Records, Big Daddy  disbanded in 1994, leaving behind some great albums to break out when the party had started to quiet down. (My favorite — “Purple Rain” if it had been written by Buddy Holly.)

Well, it’s twenty years later, and Big Daddy has returned with a new album coming out at the end of October. Appropriately for Halloween, the first single is “Music of the Night” from Andrew Lloyd Webber’s The Phantom of the Opera, but as if it had been recorded by Bobby “Boris” Pickett.

Or buy the whole wonderful album (quickly there are only 12 left in stock!) www.amazon.com/Smashing-Songs-Stage-Screen-Daddy/dp/B00NGETR6U/ref=as_sl_pc_ss_til?tag=fanbplan-20&linkCode=w01&linkId=JUHX2LF7PHU7KNT5&creativeASIN=B00NGETR6U